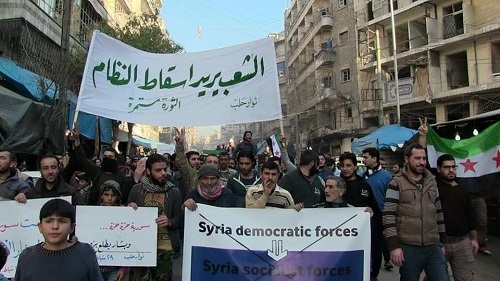 Peaceful protests have started to reappear three days after the United Nations-sponsored truce saw an end to shelling on Aleppo, its countryside and northern Syria in general, while a number of breaches by regime forces and Russian warplanes have been recorded in several Syrian provinces.

Dozens of activists and civilians in several areas of Aleppo city and its western countryside went out in peaceful protests calling for “the fall of the Syrian regime,” demanding that fighting factions unite after warplanes stopped bombing opposition areas in northern Syria.

Media activist from Aleppo city Abdel Rizak Zaqzouq told the website Al-Hal al-Souri that the “mass” demonstration erupted in the Al-Shaer district (considered one of the first districts to protest against the Syrian regime) on the second day of the truce, chanting one slogan and one phrase: “The people want the downfall of the regime.”

Media activist from the western Aleppo countryside Abu Mohamed al-Halabi told the same website that protesters in the town of Atarib in the western Aleppo countryside “called for factions to unite under the Free Syrian Army banner, and express their solidarity with the villages that are being bombed amid the truce, while calling on the Nusra Front to split from Al-Qaeda and to not engage in areas populated by civilians.”

Civilians and activists in Atarib are preparing for protests planned in the coming days with the same demands and aims of “reviving the peaceful Syrian revolution, which demanded freedom and justice and dignity,” according to Halabi.

The opposition Aleppo Media Center broadcast a video recording showing “dozens of Aleppo residents in peaceful protests carrying the flag of the Syrian revolution and signs demanding the fall of the regime and the unification of the opposition, with large participation by civilians in the city, confirming that the revolution continues,” according to the Center.