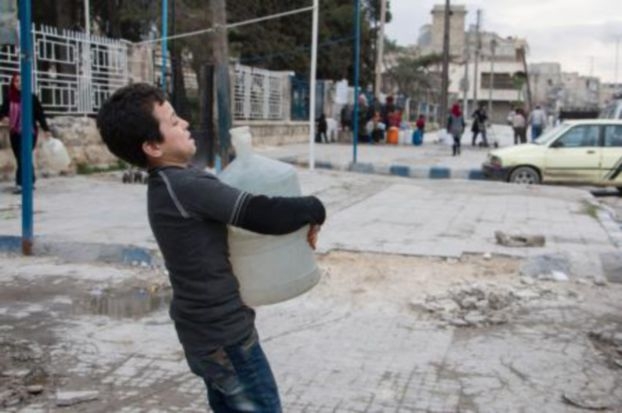 Syrian regime forces resorted to ground-ground missile attacks in its bombardment of areas in northern and central Syria amid calls to strengthen the monitoring mechanism for the “cessation of hostilities” and define the areas controlled by the Islamic State group and Nusra Front.

Opposition activists said Tuesday that helicopters dropped thousands of warning leaflets on the eastern Damascus countryside and the towns of Daraa province, calling on “the rebels” to surrender their weapons to regime forces and to expel “foreigners.”

The Syrian Observatory for Human Rights said that two opposition militants, “one of them a field commander in an Islamist faction, were killed during ongoing clashes between regime forces and loyalist militants on one side, and Islamist and militant factions on the other, in the area of the village of Hirbnafsah in the southern Hama countryside, raising the number to at least seven militants killed within 24 hours.”

Three others were also killed and 10 wounded “when a rocket thought to be a ground-ground type fell in the area of the village of Zaineeyeh in the Jisr al-Shoghour countryside in Idleb.” The Observatory added that the number of casualties “is expected to rise because there is information about a death.” It also confirmed that two people were killed, “one of them a child, and at least seven people were wounded” when two rockets fell on areas in the outskirts of the village of Mastouma south of Idleb city.

Jaysh al-Fatah (Army of Conquest), which comprises seven opposition factions including the Nusra Front and Ahrar al-Sham, has increased demands for a clear map outlining the areas considered to be under the control of the ISIS and Nusra, which are excluded from the truce.

The Russian news agency Interfax reported on Tuesday that the Russian defense ministry was respecting the truce by continuing to refrain from attacking areas where the “moderate opposition” in Syria are.