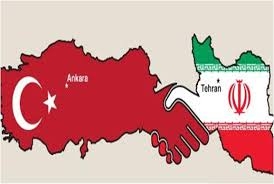 Tehran and Ankara have agreed to take “incremental steps” to resolve the region’s crises, including the Syrian crisis, amid efforts by the two governments to bridge the gap between them and work to prevent the establishment of a Kurdish entity in northern Syria, thereby reviving Kurdish hopes of independence within Turkey and Iran.

It was announced in Moscow that the Russian Foreign Minister Sergei Lavrov and US Secretary of State John Kerry expressed their optimism about the compliance with the agreement to stop hostile actions. Lavrov informed his American counterpart in a phone conversation about the importance of ensuring wider participation for opposition groups in the peace talks, including the Syrian Kurds.

The Iranian news agency IRNA reported that during his meeting with the Turkish Prime Minister Ahmet Davutoglu, President Hassan Rouhani said: “There is no dispute between our two countries about the importance of respecting the sovereignty of nations and that countries’ destinies are decided by their people.”

He added that: “There is a need to stop the war, stop the bloodshed and aid refugees and displaced people. Tehran and Ankara are able to take a serious, useful and incremental step toward these problems, where they share a point of view on how to reach a settlement.”

Rouhani pointed to the existence of “shared interests and aims” between Turkey and Iran, and said: “They must cooperate and coordinate and focus on confronting terrorism, which is a joint enemy, in order to strengthen the basis of peace and stability in the region. Iran and Turkey are two great, neighboring countries, which can carry out constructive and effective steps to establish the foundations of unity in the Islamic world.”

Rouhani warned that “foreign countries do not want a complete resolution to the problems of the region, but instead try to achieve their interests. For that reason, the nations of the region must solve their problems themselves, and it is certain that cooperation between Iran and Turkey would play a constructive role in establishing lasting peace within it.”

Davutoglu noted that Turkey is trying to “preserve the unity of Syrian territory, and rejects projects to divide the state into statelets.”

The website TurkPress quoted the Turkish prime minister as saying: “I trust that Turkey and Iran and the other nations of the region agree about the unity of Syrian territory and preventing its division.” He said that “the Arab people have dreamed of freedom and countries enjoying more democracy, but oppressive regimes have taken control of their revolutions. [Turkey] and Iran must work in unity with all nations to find a swift solution to the Syrian crisis and preserve the integrity of its territory.”