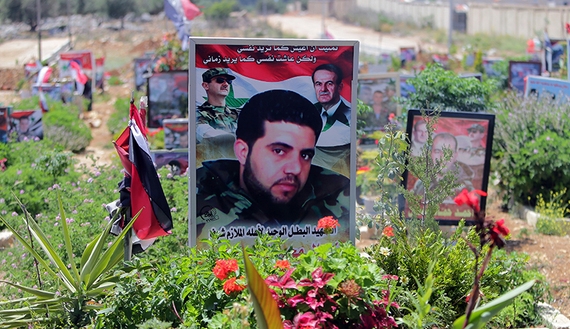 The consequences of the Iranian intervention in Syria alongside the Assad regime have continued for five years, and despite statements by officials about the importance of Tehran’s support, reliable military sources in the regime spoke to Al-Souria Net about another side to the Iranian intervention, seen in the widespread frustration of the Alawite sect, of which President Bashar al-Assad belongs to.

The sources, who asked that their identities not be revealed because of the sensitivity of their positions, summarized the reasons for the discontent among Syrian Alawites in five factors that have occurred since the beginning of the Iranian intervention in Syria starting with the outbreak of the revolution. The fact that Iranian officials have largely taken over the regime’s political decision-making process is at the forefront of the reasons of the sect’s anger with Assad and Iran.

The sources spoke about the presence of “wide dissatisfaction among military and security leaders within the regime specifically, and among Alawites in general, about the hegemony of the Iranians over the regime’s political and military decisions.” The sources said that: “They accuse Bashar Assad of driving the Alawites into an absurd war.”

The extent of Iranian control over the regime’s decisions featured clearly in the agreement Tehran reached with the Ahrar al-Sham group (one of the biggest Syrian opposition factions) last August, including a ceasefire in the city of Zabadani in the Damascus countryside, and the towns of Foua and Kefraya, loyal to Iran, in the Idleb countryside. The regime was not a party to the agreement, and its role was limited solely to implementing it.

The issue of prisoners, according to the military sources, is also a material point to understand the reasons behind Alawites’ frustration with the regime and Iran alike. They explained that members of the sect feel angry that the regime prefers to release Iranian prisoners over Alawite prisoners or loyalists who are held by the opposition.

The sources noted an incident were the regime refused to complete a deal with opposition forces for the release of a number of Alawites detained after entering the city of Adra in the Damascus countryside, and others in Homs province, while Iran compelled the regime to accept other deals which included the release of a number of opposition prisoners in exchange for releasing Iranian detainees captured in Syria while participating in military operations.

The sources said that the discontent stretches between Alawite families because of the large losses inflicted on their children fighting in the regime army or volunteering in its forces. They added that Alawites saw Iran as one of the reasons that thousands of young men have been killed, because of the policy it pursues in battles in dealing with the regime soldiers.

The sources’ statements matched the testimony given by Khalid al-Shami, a defected regime soldier, to the website Middle East Eye in November, explaining the hierarchical organization of the battles which put the Syrian soldiers at the forefront of the confrontations.

The sources said that according to their information, there were a large number of cases in which Iranian fighters and others from Hezbollah withdrew from battles, leaving Alawite officers to face their destiny alone. The military sources who spoke to Al-Souria Net said: “These are acts of betrayal.”

Defected soldier Shami confirmed the sources’ statements, saying: “The most important thing you need to know is that there is no Syrian army now, it is only militias, most of them Iranian and Lebanese.” He added: “The militias are the ones who run the war in Syria now. They think they are there to defend Syria after the official Syrian army failed to do so, and so they treat us with no respect.”

Alawite resentment at the Iranian intervention seems apparent in Homs province, where Alawite and Shiite villages overlap. Al-Souria Net’s correspondent in Homs, Yaarib al-Dali, indicated that the presence of the Hezbollah militia in the area strengthened the rift and lack of trust between Alawites and Shiites.

The correspondent said that the militias to a large extent support the majority Shiite villages at the expense of other Alawite villages, some of which live in terrible conditions. The military sources who spoke to Al-Souria Net confirmed these facts, saying that “the great loss for the sect from Assad’s policies and the Iranian intervention is the destruction of Syria’s social fabric, causing Alawites to lose their relationships with other elements of the Syrian people.”