Western diplomats say the Russian withdrawal came as a surprise, especially that no indicators were detected beforehand 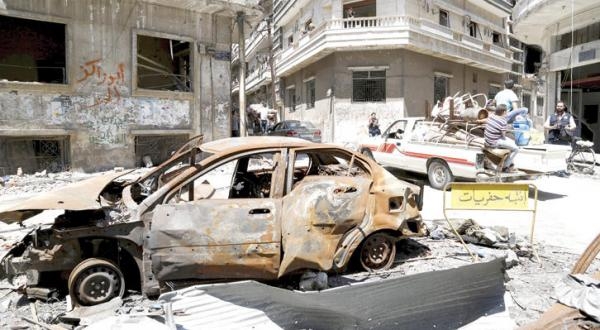 Russian President Vladimir Putin’s decision on withdrawing principal Russian air force and other units from Syria not only shocked everyone but also took a toll over the atmosphere surrounding the Geneva Syrian peace talks and on political officials, negotiators, and diplomats who are attending the negotiations, especially the ceasefire monitoring group and the U.N. Special Envoy to Syria Staffan de Mistura. Since the decision was made public, questions and analysis surfaced as to why the withdrawal took place, why now, and what could the aftermath be? How would the negotiations be affected, noting that U.N. Envoy de Mistura had attended his first official meeting with the Riyadh-based High Negotiations Committee (HNC)?

Western diplomats in Geneva told Asharq Al-Awsat newspaper that the Russian withdrawal came as a surprise, especially that no indicators were detected beforehand. Sources revealed that the U.S. Secretary of State John Kerry, who last Sunday joined a meeting with his European French, British, German, Italian, and EU representative peers, had not even mentioned the retraction or hinted at the possibility. Instead, Kerry had used spiteful language when deliberating on the Russian hostile violating attitude post ceasefire, expressing U.S. ire towards it. Sources had proposed that perhaps the Russian decision has flabbergasted Washington itself.

However, the same sources pointed out that they would keep short to observing developments until the extent of Russian withdrawal is well-defined, could be interpreted to battlefield terms, and it is clear which units have returned to Russia and which remained in Syria. Sources preferred to keep a careful observer stance from the goings on, given that Russia has been notorious for its hidden surprises.

Western hypotheses suggested that the decision is a punitive measure taken against Syrian President Assad for not cooperating with Moscow’s requests after he felt his position becoming stronger at present with the courtesy of Russian intense intervention post September 2015.

Should the guess prove credible, sources explained that Assad would have committed a lethal mistake, given that it was Russia which initially provided him with the political and artillery support when his regime was threatened with defeat.

The other assumption broaches the subject of Russian finances, although the campaign in Syria is considered to be a low-cost one, after accounting for the military devices, techniques, and artillery used on the Syrian battlefield.

However, the deteriorating Russian economy, with the declining oil and gas prices aside a suffering budget, could have pushed Putin towards the surprising withdrawal.

The stunning decision on withdrawal is in keep with the approach Putin employed when he decided on the intense intervention.

Sources suggest that Moscow has taken a deterrent tactic for averting new U.S. imposed sanctions. Especially that Kerry had previously mentioned that in case of the ceasefire failing a plan B will be put into effect. Plan B held the potential of being high-up military support presented to the Syrian opposition, or could go to hitting the Russian economy at home with imposing new sanctions.

Moscow had excused its intervention in Syria for the purposes of striking what it considers terrorist organizations, ISIS and the Nusra Front being the main two. However, the target has not been achieved despite the thousands of Russian air strikes launched.