KNC says project was removed from the national and geographic particularities of Syrian Kurdistan, adding the greatest damage will be done to the regional and national struggle 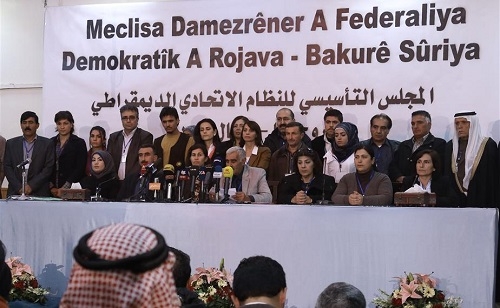 The Kurdish National Council has criticized the “Democratic Union Party singlehandedly announcing a one-sided federal democratic union,” saying the project was “far from the national and geographic particularities of Syrian Kurdistan.”

In a statement, the General Secretariat of the Kurdish National Council in Syria called for “all parties to bear their historic responsibility placed upon them by the plight of the Syrians, and the extent of injustice and deprivation faced by the Kurdish people.” It said the solution would come through “complete compliance with international resolutions, led by United Nations Resolution 2254, which calls for resolving the Syrian crisis politically according to the outcomes of Geneva I and its connected resolutions.”

The statement indicated “the need to end the injustice against the Kurdish people through constitutional recognition of their regional rights in Syria, and rebuilding the Syrian state according to a federal union, with a pluralistic, democratic, parliamentary regime, guaranteeing the rights of all regional, religious and confessional constituencies.” It added that “the council, as part of the national opposition, stresses the need for federalism of the Syrian state, and expresses its reservations about the document signed by the Syrian National Coalition about administrative centralization, and maintains the right to defend the principle of the federalist state and the efforts to realize it in international and national forums.”

The council added that “the state should be rebuilt according to a federal unionist regime which guarantees the rights of all constituencies, and considers the Kurds a unified, integrated, geographic and political unit in the field of resolving their regional issues.”

The Democratic Progressive Party (one of the biggest parties outside the Kurdish political frameworks) said “the decision to announce the implementation of the federalist regime is in accordance with the ambitions of the Kurdish people who have long struggled for it.” But it stressed that “decisions like this are not connected with the destiny of the Kurdish people in Syria alone, and it is not possible to take a unilateral decision without the consultation or participation of the remaining parties in the Kurdish movement, and without national agreement with other Syrian communities, especially the Arab community with whom we are connected in a common destiny.

“This is one of the necessities of taking such a decision, to eliminate fears that might raise any problems or disputes between the different Syrian communities,” it said.