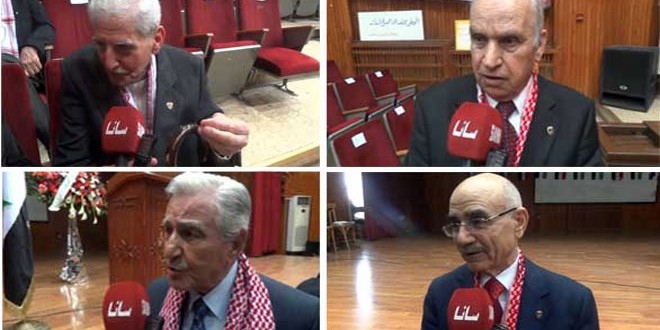 Syrians celebrated the 70th anniversary of the country's Independence Day on Sunday, April 17, which marks when French occupation forces left in 1946, renewing their pledge to maintain their country’s sovereignty, national unity and independence.

The event offered the occasion for citizens to reflect on the meaning of Syria’s independence, defense of the homeland and preserving sovereignty and national unity as the country marks five years of war and foreign interference.

With their greatest aspiration now being that of achieving final victory against terrorism, the Syrian people believe that this hope can only become a reality through continued support for the Syrian army in its unrelenting struggle since 2011.

“As they once achieved independence and expelled the enemy from their homeland 70 years ago, the Syrians are facing a similar act of aggression perpetrated by terrorists and backed by world countries,” said retired air force pilot Ismael al-Atrash, son of prolific Syrian revolutionary commander Sultan Pasha.

This year’s anniversary was celebrated amid growing popular momentum in light of the recent military victories on various fronts, including the recapture of Palmyra city from the grip of the Islamic State group, retired lieutenant Mahmoud al-Shaqa pointed out.

The largest victory, Sahqa said, will be when we defeat terrorists, their supporters and all those who wish to harm Syria.