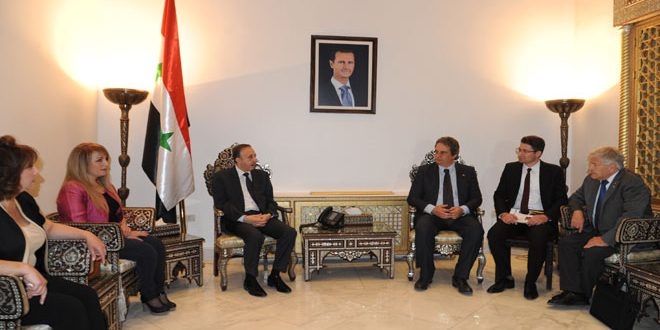 During the meeting, Laham called on European states to cooperate with the Syrian government in combating terrorism and work for putting an end to the unjust economic blockade imposed on the Syrian people.

The speaker told the delegation that the terrorist attacks that hit Paris and Brussels are a consequence of European states turning a blind eye the movement of thousands of foreign fighters through Turkey and into Syria.

In turn, Fiore indicated that the European public have come to understand that the Syrian people and army are the ones really fighting terrorism, a realization reached following the terrorist attacks which struck at a number of European countries.

He pointed out that the APF has engaged efforts in all European countries seeking to end the sanctions imposed on the Syrian people, adding that the party has organized several conferences and events in Europe and published articles about the spread of terrorism to influence European public opinion.