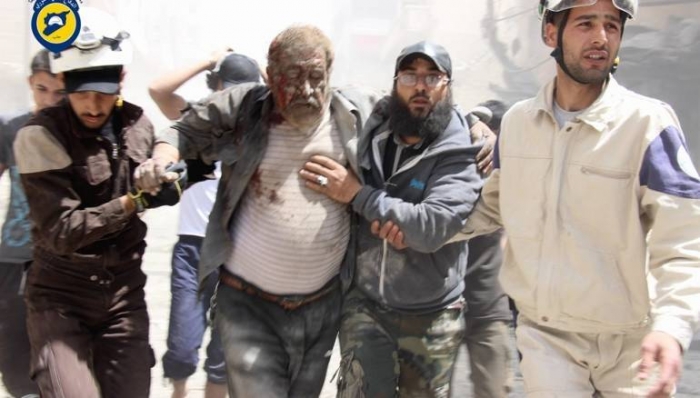 Regime forces carried out two appalling massacres on Saturday in the Damascus countryside and the city of Aleppo, with dozens of dead and wounded, including women and children.

Activists on the ground in Douma said that regime forces bombarded a popular vegetable market, killing 13 people and wounding others. The opposition Douma Coordination Committee published the names of some of the victims, including a 6-year-old child.

The Syrian Civil Defense in the Damascus countryside confirmed in a statement that women and children were among the dead, noting that in addition to the market, shelling also hit crowded residential districts. Activists said that regime forces targeted the market with mortars and heavy artillery, publishing images of the area on social media showing traces of blood on the ground and scattered vegetable crates.

Baraa Abdel Rahman, a media activist in the city of Douma, said that there were still unidentified people among the victims, adding that there were a large number of wounded in the market’s streets. He noted that the city was empty of pedestrians.

In parallel, regime forces carried out another massacre in the Tareeq Al Bab district of Aleppo city. The opposition Aleppo Media Center has documented the deaths of 12 people so far, in addition to dozens of wounded.

The center said that “warplanes from the regime forces bombed the district [Saturday] afternoon,” and published a video clip showing Civil Defense workers pulling victims from under the rubble of houses, including trapped children.

The two massacres come as a violent response by the regime after the halt of negotiations between delegations of the Syrian opposition and the Syrian government in the Swiss city of Geneva. The opposition demanded talks be delayed until the regime responds to their demands, especially concerning the bombardment of civilians.