High-level sources reveal Syrian government is expected to witness a change, specifically in the services and economics departments, even as negotiations around an "expanded national government" stall in Geneva 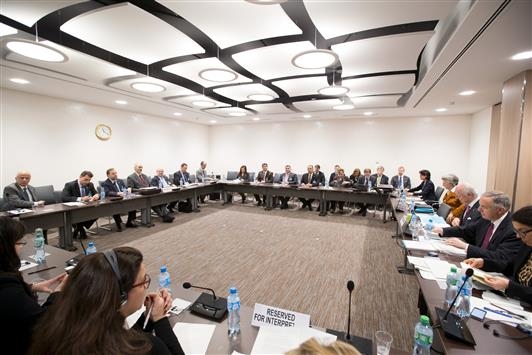 Al-Safir has learned that a change in Syria’s government will occur soon, with the beginning of the second legislative session, in a way that allows the leadership in Damascus to say that the process of change has “taken on legislative and executive dimensions” — and all according to the “constitutional track” stemming from the agenda of the 2012 constitution.

According to what high-level sources told al-Safir, the terms of the change may affect the current Prime Minister Wael al-Halki and other ministers extensively, although the direction of the issue is not yet fully crystallized, in light of recognition of the difficulty of managing the services and economic files simultaneously, which is what leaves open the possibility of broad change, albeit timidly.

The government faces major criticism, including its inability to address the economic situation and bring order to the overwhelming chaos in this sector, in addition to the issue of corruption, and all the implications resulting from the war’s effects.

The governmental change will occur at the time when the idea has been circulated by Syrian officials of “an expanded national government,” as a result of the negotiating process sponsored by the United Nations in Geneva.

In the view of the same source, what is happening in Geneva is “another track connected to different international and regional factors,” and “may need a long time.” What the government is doing in Syria is “implementing the constitutional agenda according to local standards only”. Despite the “impression that Geneva is failing, and the conditions for a settlement are not yet ripe,” in the end “the belief in a political settlement should not obviate pursuing internal institutional work.” It is intended that the processes of change appear to be a renewal of the most important institutions at the level of legislation and services, in a way that gives an encouraging impression about attempts to improve the extremely dire living conditions in the country, especially in the areas under state control.

It is thought that the expected change will focus on the service and economics ministries which are in daily contact with the lives of citizens, noting that the deteriorating conditions in the living conditions are primarily connected with the war and with the record fall in the currency, which has retreated for various reasons from 80 Syrian pounds to the dollar in the fall of 2012 to currently 510 pounds to the dollar. This is in addition to the widening margins of corruption and quick riches accompanied by sharply deepening poverty, without the rate of illegal financial speculation decreasing or the smuggling of hard currency out of the country.