The proposal was made in a letter from Riad Hijab, the coordinator of the opposition High Negotiations Committee (HNC), to U.N. Secretary-General Ban Ki-moon 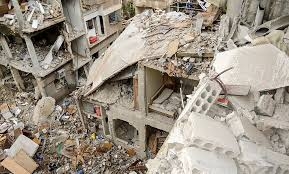 Syria’s main opposition has proposed a nationwide truce on the occasion of Ramadan, opposition delegate Basma Kodmani said on Wednesday.

The proposal was made in a letter from Riad Hijab, the coordinator of the opposition High Negotiations Committee (HNC), to U.N. Secretary-General Ban Ki-moon, she said.

“The letter to Ban Ki-moon suggests a truce, we know there should be one, full respect of the truce across the country, nationwide, for the full month of Ramadan,” she said.

“Ramadan being next week, that would start creating the right conditions, the right atmosphere, for us to return to [peace talks in] Geneva. This is the intention of the HNC.”

She said that opposition armed groups have shown support to the proposal, which would revive the “cessation of hostilities” that began at the end of February and applied to all groups except for ISIS and the Al-Qaeda-linked Nusra Front.

“If the regime abides by it, the opposition and the armed groups will do so as well,” she said.

A spokeswoman for Staffan de Mistura, the U.N. diplomat mediating the peace talks, confirmed that the proposal had been put to the International Syrian Support Group, the group of countries led by the United States and Russia which is overseeing the peace process.

“We are aware of this proposal, which is also being discussed between the co-chairs of the ISSG in the larger framework of consolidating the cessation of hostilities,” she said.

“Any consideration to de-escalate the fighting on the ground is most welcome, especially during the Holy Month of Ramadan.”

De Mistura has said he wants to see an improvement in humanitarian aid access and a lessening of the violence before launching a new round of peace talks.

On Wednesday, U.N. aid convoys entered the besieged towns of Daraya and Moadamiya, reaching a besieged suburb of the Syrian capital in the first such delivery since 2012.

Kodmani said that was a first step but much more needed to be done, and the international community should keep the pressure on the government of President Bashar al-Assad.

Government forces have blockaded Daraya since residents expelled security forces during the early stages of the 2011 uprising against head of the Syrian regime Bashar Assad.

The ICRC says a joint convoy with the U.N. and the Syrian Arab Red Crescent entered the suburb around 3 p.m. The U.N. estimates that 4,000 to 8,000 people currently live in the suburb.

An official for the Syrian Arab Red Crescent says an aid convoy of 36 trucks has entered neighboring Moadamiyah, which is also under government siege. The suburb last received aid one month ago.

“There is no indication that there is a true move towards loosening the sieges and allowing an end to the starvation strategy. That’s what we need to see,” she said.