Success of talks is connected with improvement in humanitarian conditions and cessation of hostilities, UN envoy tells reporters in Geneva 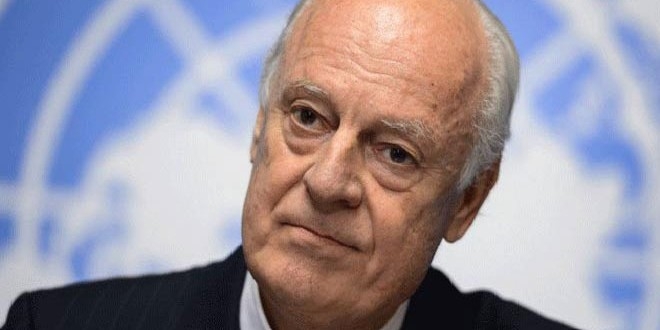 UN Special Envoy for Syria Staffan de Mistura said that the current time is not right for a resumption of intra-Syrian peace talks in Geneva, adding that a formal date has not yet been set for the negotiations.

“The time is not yet mature for the official third round of the intra-Syrian talks. We are intending and we want to do it as soon as possible, no doubt about that,” de Mistura said during a press conference in Geneva on Thursday.

The envoy stressed that in order for negotiations to be effective there must be a clear intention that will lead to real results, adding that the success of talks is connected with an improvement in the humanitarian situation and the cessation of hostilities.

He said the UN has received approval from the Syrian government to deliver humanitarian aid to 19 besieged areas, noting that aid delivery by land is the first option.