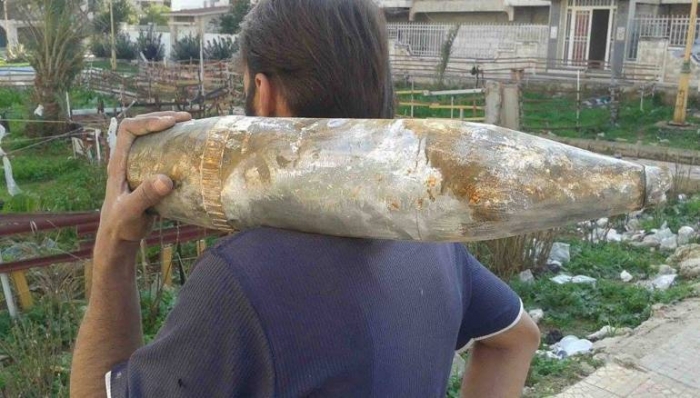 Opposition fighters are reusing unexploded bombs and shells fired by regime warplanes and artillery on villages and towns in the Homs and Hama countryside, rebel sources claim.

Engineer Abou Nedal, the head of the military council in Kafr Laha, told Zaman al-Wasl that the biggest of the missiles had been fired by a warplane on the western al-Tayba village on Tuesday and did not explode.

He added that the missile was three meters in length and has the capacity to destroy a whole residential neighborhood.

The town of Al-Houleh as well as the villages of Aqrab and Kharbet al-Jaame in the southern Hama countryside have been exposed to heavy air strikes, with many of the dropped munitions failing to explode due to technical failures, Abou Nedal indicated.

He confirmed technicians from the military council and Ahrar al-Sham rebel group specialized in dismantling the missiles by removing the detonator then transporting the rest of the device to a blacksmith to work with the body.

Technicians then remove the explosive material to manufacture bombs for use against the regime and its allied forces.