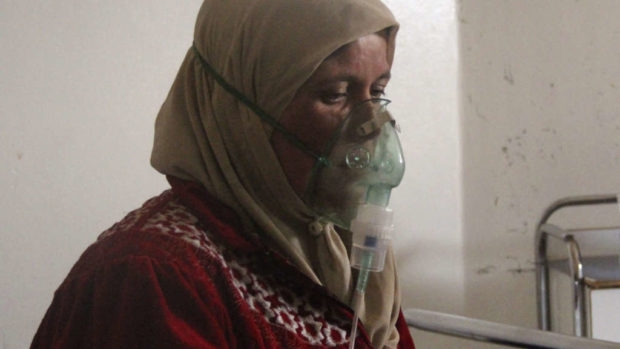 The spokesman for Jaish al-Islam (Army of Islam), a dominant leader in one of the Syrian opposition factions in the area, denied all allegations made by the Assad regime.

“Terrorist organizations yesterday attacked a Syrian pro-Assad armed camp in Eastern Ghouta, in the Damascus countryside, using poisonous substances which had effects on the nervous system which harmed a number of the troops (causing) suffocation and respiratory problems,” said SANA, reporting an so-called Assad army source.

The statement did not say which groups are believed to have carried out the attack – noting that that the Assad regime considers all factions fighting against it as terrorists.

Local media also broadcast footage of Assad-supporting troops wearing oxygen masks struggling to breathe while being given first aid. “They had difficulty breathing, a feeling of almost paralysis and an increase in saliva in the mouth,” an Assad armed trooper told Syrian television.

Another victim of the attack, interviewed in hospital, said a “smoke bomb” landed and then he started to feel the symptoms. Nonetheless, the Syrian Observatory for Human Rights, which monitors the Syrian conflict, now in its sixth year, said it had no information about the reports.

Jaish al-Islam spokesman Islam Alloush said the Assad regime was the first to use chemical weapons that it stored and previously used in the Eastern Ghouta.

U.N. investigators established that sarin gas was used in Eastern Ghouta in a 2013 attack. The United States accused Damascus of that attack, which it estimates killed 1,429 people, including at least 426 children. Assad’s so-called government denied responsibility, and blamed rebels.

Later that year the U.N. and the Assad regime agreed to destroy the state’s declared stockpile of chemical weapons, a process allegedly completed in January 2016.