“We have presented a clear proposal that the transitional stage will be led by five deputies to the president," opposition figure tells Russian reporters 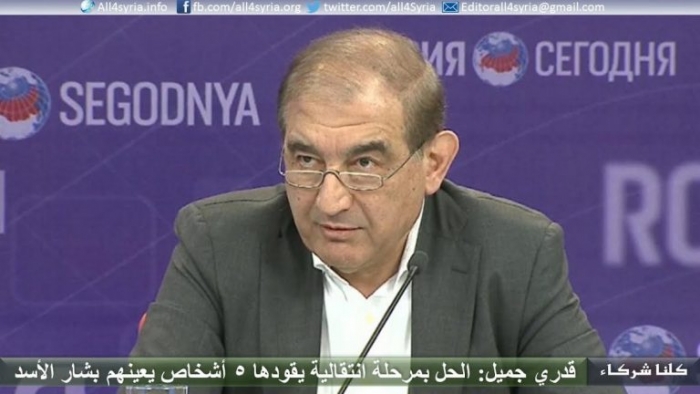 The secretary of the opposition People’s Will Party, Qadri Jamil, said that negotiators involved in the final round of Geneva talks to be held in July have made a clear proposal to lead the transitional stage.

Jamil added in his comments to the Russian Sputnik news agency on Wednesday in Moscow, “We have presented a clear proposal that the transitional stage will be led by five deputies to the president, appointed in accordance with the powers granted to him constitutionally, and will be given the necessary authority to implement Security Council Resolution 2254, and therefore we will not be going outside the Syrian constitution, and not going outside the Security Council resolution. I see that according to the rumors, this approach is headed toward application.”

He said that nothing had changed in the general direction of events, and that nothing had changed in the principle that the political solution was the only solution. He added that any military solution was impossible despite one side advancing over the other in various areas of the country, adding that it was impossible for Syria to continue beyond that in bearing damage and destruction.

Regarding the Western political forces, Jamil said: “Our relationship is normal. We’ve forced them to see us, and they cannot bypass us. They do not speak with us frequently, openly and continuously, but through our weight we’ve become a reality for them.”

According to him, what is needed now is to find a solution to the issue spoken about by the Security Council resolution and the Geneva 1 declaration, which is the issue of the transitional body to resolve the political crisis, where there was a big difference between what the regime put forward and what the Riyadh delegation proposed.

Jamil added: “It’s not possible to find a compromise between the proposals for the transitional body, because the regime had proposed a transitional body formed from a broad, actual government, while the Riyadh delegation has a proposal for a transitional authority, where it’s not known where it comes from or what its identity is or how it will be formed. The option of the transitional body according to Geneva and the Security Council Resolution 2254 means real participation half and half, while the option of the broad government is understood to mean a broadened government at the expense of the opposition, because the government would remain the same with an increase in opposition, and this proposal is unacceptable for the coming stage.”