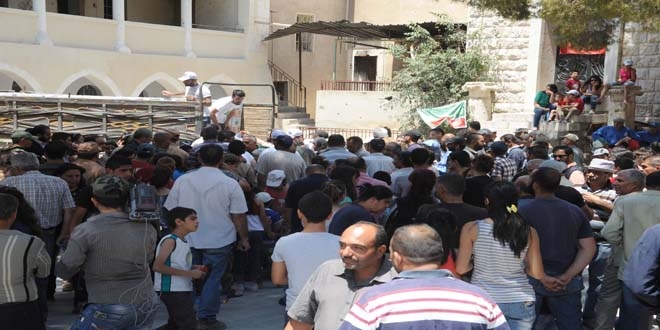 Russian officials announced this week that humanitarian aid including food baskets and meals had arrived in Maaloula city in the Damascus countryside from Russia’s southern Chechnya region.

Parliament member Ziyad Sabsabi told journalists that the total amount of humanitarian aid offered to Syria is estimated at 500 tons, indicating that the Chechen Ahmat Kadyrov Charity Foundation will continue to distribute aid in all Syrian areas following the holy month of Ramadan.

In turn, a member of the executive office in Damascus countryside, Barakat Maria, said that the aid distribution came as part of a joint Syrian-Russian effort to provide assistance to the cities and villages affected by terrorism, particularly the city of Maaloula which has suffered heavy attacks by terrorist organizations.

He added that his office, in cooperation with Damascus University, has set up plans for the restoration of the historical old town in Maaloula, providing 500 million Syrian pounds ($2.3 million) to repair its houses and churches.