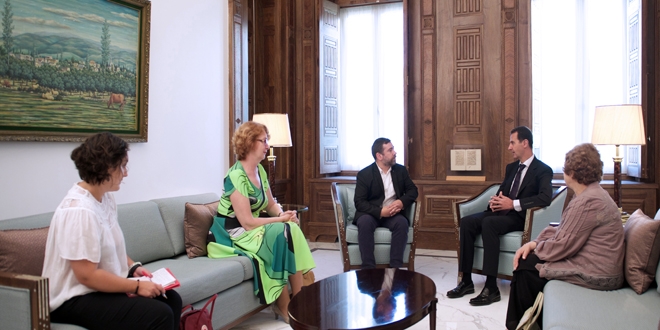 President Bashar al-Assad told European parliamentarians on Sunday that the West’s support for rebel groups in Syria is responsible for the terrorism and refugee crisis facing Europe.

During a meeting with a delegation from the European Parliament led by Javier Couso, Assad said that the issues of terrorism, extremism and “waves” of refugees to Europe are a direct result of Western leaders’ policies towards Syria.

The Syrian president slammed Western leaders for providing the political cover and support to terrorist organizations in Syria, adding that European parliamentarians could play a significant role in correcting their government’s policies which have caused the spread of terrorism and forced many Syrians to flee their country due to harsh economic sanctions.

Responding to Assad’s remarks, delegation members said witnessing the suffering of the Syrians firsthand would drive them to correct the policies of their governments in order to lift the sanctions imposed on Syria. Delegates also affirmed the need to keep Syria’s sovereignty intact, stressing that the Syrians alone should decide their country’s future without any foreign interference.