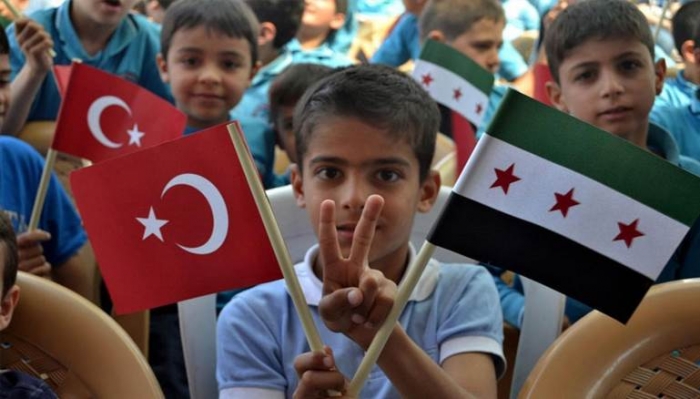 Fifty thousand tweets were enough to shoot the hashtag #suriyelilerehayir (no Syrians) to Turkey's most circulated position on Twitter on Saturday, in a new reaction against repeated statements from the Turkish President Recep Tayyip Erdogan about the possibility of giving Turkish citizenship to Syrians living in the country.

The angry Turkish reaction came after a video surfaced of a group of young Syrian men celebrating and dancing on a beach in Istanbul during Eid al-Fitr, chanting “Syria.” The celebration was met with “local censure” about the contradiction between the video and the reality of the Syrian war, now in its sixth year, according to Syrian opposition pages published from Turkey. Syrian activists denied that the video showed a transformation of the Florya Beach, along the Sea of Marmara, into the site of protest, as had been rumored on social media pages.

At the start of this year, Erdogan spoke about easing the issuance of Turkish citizenship to Syrians who wanted it, with media reports saying Turkey was headed toward issuing citizenship to 300,000 Syrians in stages throughout the next few months, which ignited the discontent of Turkey’s opposition as the move could affect the results of Turkish elections by 2 percent, according to the local newspaper Haberturk.

This is not the first online movement against Syrians in the country. On July 3, the hashtag #ÜlkemdeSuriyeliİstemiyorum (we don’t want Syrians in our country) was also used on Twitter, at a time when Turkish activists were calling for protests in Istanbul “to denounce the presence of Syrians on Turkish territory and demand their return to their country.”

In parallel, journalists and Turkish intellectuals launched the hashtag #‎SuriyeliMültecilerKardeşimizdir (Syrians are our brothers) on July 4, and revitalized it as a response to the new hashtag, saying that, “The Syrians are guests of Turkey and to advocate for them and stand beside them in light of the injustice they have been suffering for five years.”