According to a seven-page draft agreement, Moscow and Washington are considering high-level coordination beyond “carrying out air defense” in Syria’s skies, to reach a level of “direct cooperation” between the two armies and their intelligence agencies against Nusra Front and ISIS 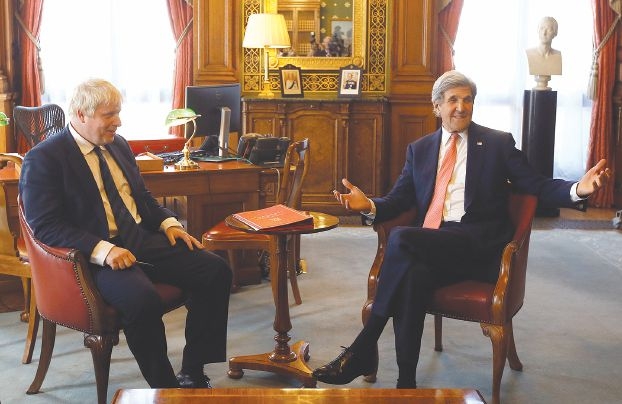 US Secretary of State John Kerry has put before his main counterparts from European countries the draft agreement which he took to the Kremlin two days ago containing an agreement around the three parallel issues of a comprehensive ceasefire, military cooperation in fighting ISIS and the Nusra Front, as well as launching a political transition in Syria and halting the Syrian government operations beginning in August. Meanwhile, the British, French and German foreign ministers put a document of principles of the political transition on Kerry’s table, “without a future” for President Bashar al-Assad and “requiring he and his close aides not be nominated” in the elections at the end of the transitional period in mid-2017.

It seems the two documents, “the principles of the political transition” and “the approach of American-Russian cooperation against ISIS and Nusra and strengthening the cessation of hostile operations agreement” undertaken in February included support of the European countries for the cooperation between Washington and Moscow in the war against terrorism in exchange for serious efforts to launch a political transition process in accordance with the Geneva declaration and Resolution 2254.

It was notable that the new British Foreign Minister Boris Johnson adhered to the traditional position of his country, on the eve of the arrival of his American and European counterparts to London: “I will be making clear my view that the suffering of the Syrian people will not end while Assad remains in power. The international community, including Russia, must be united on this.” He added that Moscow had a “unique role” in this respect.

Johnson, who when he was mayor of London hosted a party to create a model of Palmyra’s Arch of Triumph in the British capital, wrote a newspaper article under the headline: “Bravo for Assad” in March praising the Syrian president for saving the ancient city of Palmyra, a UNESCO world heritage site, from ISIS. He wrote: “…no matter how repulsive the Assad regime may be – and it is – their opponents in Islamic State of Iraq and the Levant (ISIL) are far, far worse.”

After the ministerial meeting yesterday, in which the Italian, French and German foreign ministers as well as the EU official for foreign relations participated, and addressed the Syrian and Yemeni crises, he said: Assad must go, and all Western powers are agreed upon this.

Johnson blessed the worksheet completed by senior officials in the British, French and Italian foreign ministries, and which included the principles of political transition in Syria, stating that material change needs to occur in Syria without Assad having any role in the future and assurance of the survival of the state composition “as is”, despite the need to reform institutions which have participated in acts of repression. It also stressed that defeating ISIS will not be possible except within a framework of a negotiating-political transition process, and the end of the civil war.

“Assad and His Senior Aides”

Johnson affirmed the principles for Syria’s future derived from the Geneva declaration and Resolution 2254, including “Syria’s sovereignty, its independence, its national unity, and territorial integrity” and that it be, “democratic, pluralistic and non-sectarian,” in accordance with the statement of the International Syria Support Group, in addition to forming a transitional governing authority with, “the current Syrian government and opposition and other groups” with a guarantee for “the survival of government institutions, including the armed forces and security circles while reforming them to respect human rights and professional standards, and for the high leadership to be a source of trust for all, and, except with the departure of Assad and his close aides, no additional restrictions will be imposed on the composition of the leadership.”

The three countries confirmed adherence to the timetable of Resolution 2254 for the transitional stage for holding free and fair elections in which various parties participate, to be held within 18 months following the drafting a new constitution, that is, by the middle of next year. They added that throughout the transitional process, all executive powers will be transferred to the transitional government. Among the other options to carry that out, interim constitutional measures may be taken to transfer powers from the president to the transitional government, which will work with the international community to fight terrorism. In addition, all members of the army and security forces must be completely subject to the control of the new transitional authorities, with the reform of the forces most involved in acts of repression. They added that President Assad cannot participate in the elections, subject to international monitoring, and therefore must depart through them.

According to Western officials, this joint position from the European countries aims to pressure the Russian-American negotiations, especially since Moscow has rejected the involvement of other countries, including the permanent members of the Security Council, as well as the “European worry that the White House will rush to an agreement with the Kremlin before the end of President Barack Obama’s term.” One of them said: “Recent months have seen the Russian and American positions grow consistently closer,” in addition to Moscow’s repeating that it “will not pressure Damascus and that Assad stepping down means the collapse of what remains of its institutions.” Officials who have visited Damascus mention Syrian officials’ feelings of “victory and that adhering to the battlefield is what will resolve the conflict. After surrounding Aleppo and after visits to Western security officials, they are not likely to offer any small concessions regarding the resignation of Assad. They did not offer these concessions at the height of weakness in previous years.”

During his stay in London, Kerry spoke by phone with his Russian counterpart Sergei Lavrov to continue conversations about the military agreement, the draft of which was delivered to the Kremlin last Friday, coinciding with conversations of Robert Malley, Obama’s advisor on the Middle East, and Vladimir Putin’s aide Alexander Lavrentiev in Switzerland.

According to a draft of the agreement, which is seven pages and of which Al-Hayat obtained the most recent copy after the previous draft was published in the American Washington Post, Moscow and Washington are considering high-level cooperation, more than “carrying out air defense” in Syria’s skies, to reach a level of “direct cooperation” between the two armies and their intelligence agencies against Nusra and ISIS.

The draft includes details of the formation of a “joint executive group” in the Jordanian capital Amman and its composition of a number of officers and intelligence officials, the language used, and technical issues. But it was notable that the American side linked this cooperation to pushing for the launch of a political transitional process in Syria, in addition to putting the Syrian military’s operations under the “command” of a working group so that it obtains details of the movements of the Syrian army and warplanes at least a day before and any change that occurs in the daily land and air program. The draft said: “(Syrian) regime (warplanes) are forbidden from flying above specific areas which include areas of the Nusra Front or areas where Nusra has a strong presence, or areas under opposition control or include some Nusra fighters,” with the exception of medical evacuations and humanitarian operations.

The draft also included a supplement titled, “approach to operational cooperation between Russian and Americans against ISIS and the Nusra Front and entrenching the cessation of hostile operations.” It put one of its first priorities as “defining the territory under the control of ISIS, the Nusra Front and the moderate opposition, so that Nusra does not find a safe haven for itself in any area inside Syrian territory.” In addition to Russia and America vowing “to work in parallel to enforce the political transitional process which is stipulated by Security Council Resolution 2254.”

The agreement contained articles including “reinstating the cessation of hostile operations and setting a goal to achieve the level that was reached at the end of February and continuing for at least seven days, while the United States and Russia form a joint team to enforce the agreement, including experts specialized in Syria and professionals with targeting experience.” The joint team will be built to implement the agreement at a specific date to achieve the missions, including, “working as much as possible throughout a period of no more than five days to achieve a joint map of the territory in which the Nusra Front clusters are concentrated including areas where Nusra Front clusters are close to opposition clusters, with the aim of developing defined targets,” as well as exchanging “intelligence information and developing the aims of military operations to be carried out against the Nusra Front, including but not limited to, leadership, training camps, logistical stores, supply routes, and major bases.”

It also included, “the group specifying air raids that will be carried out by the Russian air force and/or the American military forces, being linked to Nusra Front operation in specific areas,” and that before the formation of the joint team to carry out the agreements, technical experts from the United States and Russia would work toward recording the geographical coordinates of positions that have been identified, according to the draft’s supplement.

It also provided for “developing mechanisms to monitor and implement stopping the Syrian army from any military air activity above the specified areas… and stopping all Syrian military air activities — bombers or helicopters — in the identified areas, which have been agreed upon, with some appropriate exceptions for non-combat purposes” and that “in the event Syrian military activity or air strikes incompatible with that are recorded, any participating party will be ejecting from the joint team to implement the agreement.” However, it said that, “with the exception of point-blank threats which the United States or Russia face, which make prior agreement on the target impossible, the United States and Russia will not act except against Nusra Front targets previously agreed upon and following appropriate measures carried out through channels to remove existing conflicts.” The two parties will subsequently work to “strengthen independent and simultaneous efforts against ISIS”.

The two sides set July 31 as a date, that is the eve of the beginning of the transitional phase according to Resolution 2254, for “resolving the three related issues”, including “military and intelligence cooperation to defeat ISIS and the Nusra Front and translate the cessation of hostile operations into a permanent ceasefire for the entire country, implemented in stages through the political transitional process, including measures around the positions of the forces and separating them, controlling heavy arms, regulating the flow of arms into Syria, and monitoring and ensuring indolence and implementation,” in addition to “placing a framework for working toward the political transitional process proceeding from Security Council Resolution 2254, including measures around the modality and date of forming a transitional government with full executive powers, founded on the basis of mutual agreement, and reformation of security and intelligences institutions and organizing constitutional and electoral processes.”

Washington is still waiting for Moscow’s response to this proposal, which called for consultations between Russian officials and the Iranian and Syrian governments to connect it with the Syrian regime forces and its supporters, in addition to connecting it with the search for a political transition and the possibility of renewing the Geneva talks next month.