The Church of the Virgin Mary, which was hit by the Russian air strikes, is the only church in the city. It dates back hundreds of years, having been built in 1886 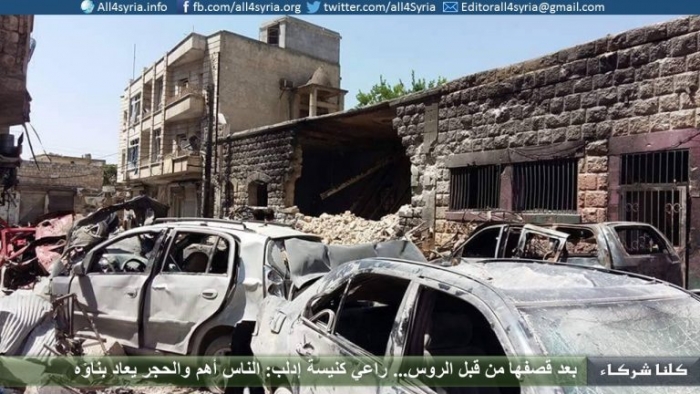 Russian air strikes that hit the city of Idlib on Wednesday August 10 destroyed a large part of the Church of the Virgin Mary, the only church in the city, in addition to destroying much of the Christian district, forcing Christian residents of the area to leave and disperse throughout the city in fear of bombardment.

This was the second time in which the same area had been hit by Russian air raids in less than two months. The majority-Christian district in central Idlib was hit with vacuum bombs in two air strikes. The strikes caused heavy damage in the district and started fires. It also wounded a large number of Christian civilians who were in the street, in addition to damaging a large number of cars.

The Church of the Virgin Mary, which was hit by the Russian air strikes, is the only church in the city. It dates back hundreds of years, having been built in 1886.

All4Syria tried to communicate with the patron of the church, Father Ibrahim Farah, who is living in Turkey, but he has declined to issue any statement about the incident to media. He said that the human soul is more important than who is strongest; the most important thing to him today was to stop Syrian bloodshed, and houses of worship can be rebuilt.

Farah had left the country after the Jeish al-Fatah took control of the city of Idlib in mid-2015, with rebel groups securing passage for him and dozens of Christian families to Turkey at his request, according to previous reports. Another portion of Christian families remained in the city.

In the city of al-Yaqoubiyeh nearby in the western Idlib countryside (toward Jisr al-Shughour direction), a large proportion of Christian families still live in the village. They have also been subjected previously to air raids by Russian and regime warplanes, which killed two people and wounded dozens in a previous attack.

The Christians of Idlib declined to talk in front of cameras, out of fear for their relatives in regime-held areas. But they said that they would not leave Idlib despite the air raids, bombardment and destruction, and that they would stay on this land just like any other Syrians.

Syrians activists circulated reports saying that the targeting of the Christian district was proof that the regime was lying abut protecting minorities, and arguing that their planes do not differentiate between majority and minority. In reality, minorities are a bargaining chip that the regime trades in for its own interests while claiming to protect them.