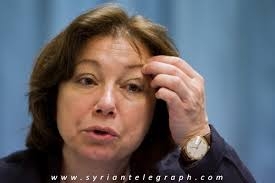 Basma Qadamani, a member of the opposition’s delegation to the Geneva negotiations, said that gains made by rebel and FSA groups in Aleppo including breaking the siege on the city’s eastern areas have given the opposition a stronger position in any future round of negotiations in Geneva.

Kadamani said that before the siege on Aleppo was broken, the Russians had thought that they could force the opposition to agree on the formation of a so-called national unity government with Assad in future negotiations. The answer came from the rebel and FSA fighters who made it clear they would not allow Russia and the Assad regime to suffocate a whole city in order to dictate the terms of a political solution, Kadamani added.

The opposition’s High Negotiations Committee (HNC) suspended its participation in the Geneva negotiations about three months ago due to the Assad regime’s refusal to implement the UN Security Council resolutions on Syria, most importantly those related to lifting sieges, allowing the delivery of humanitarian aid, releasing detainees, and abiding by the cessation of hostilities agreement.

Kadamani noted that the blockade that the Assad regime imposed on eastern Aleppo with the help of Russia has not been met by any response from the international community, adding that the whole world stood by as regime forces were encircling the city.

Russia’s proposal to open so-called "humanitarian corridors" was aimed to force residents of the eastern part of Aleppo to leave their homes, Kadamani said, adding that the Russian proposal was basically designed to force civilians to make a choice between leave their city or being bombed.