At the end of the graduation ceremony, Mrs.al-Assad honored 64 graduates and distributed certificates to them 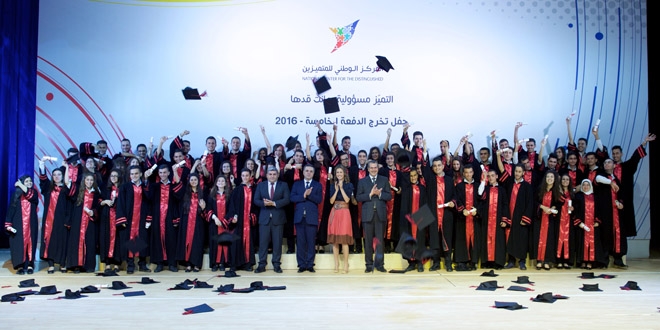 The National Center for Distinguished Students celebrated on Sunday the graduation of the fifth batch of its students in the presence of Mrs. Asmaa al-Assad at Dar al-Assad for Culture and Arts in Lattakia.

In a speech during the graduation ceremony, the president of the center Dr. Iskandar Munif said that the center aims at attracting creative young people, and to provide full support and care for them, as they will significantly support the process of building society.

He added that the center’s students have participated in a number of scientific competitions such as the Syrian Scientific Olympiad, in which they achieved distinguished results and won many international awards.

Dr. Munif thanked President Bashar al-Assad and Mrs. Asmaa al-Assad for their tireless efforts to develop the work of the center.

In turn, Alan Touma, who won the first place, expressed his hope that the students’ success will be a new successful start on the road to excellence.

For her part, Ishtar Ahmad, a graduate from the Faculty of Fine Arts at the University of Damascus who was chosen by organizers of the graduation ceremony as the embodiment of excellence talked in her speech about how she was injured and her insistence to pursue her life despite all obstacles.

In Sep 2015, Ishtar was injured by terrorist shells. Afterwards, she insisted on discussing her graduation thesis inside her room at Damascus Hospital.

At the end of the graduation ceremony, Mrs.al-Assad honored 64 graduates and distributed certificates to them.

The ceremony included a promotional film about the center and the achievements of the fifth batch.