Sources claim Kurdish fighters control about 90 percent of the city, with no sign of a truce being reached with the regime 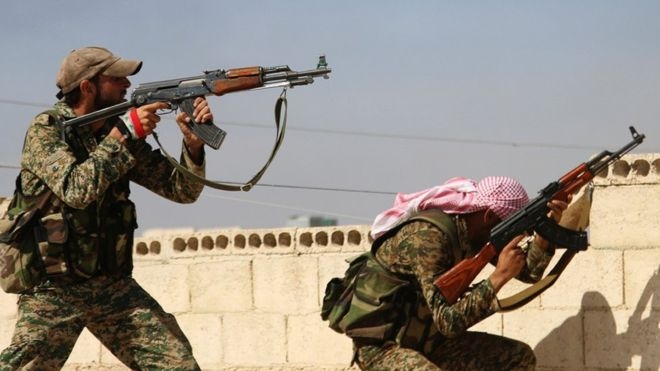 Local sources in Hassakeh said that the organization’s fighters had taken control of the districts of Gharioun south of Hassakeh, and al-Nashwa al-Sharqiyeh in its west, as well as the “Masaken al-Mahata” west of the security area, after taking control of the Al-Zahour district south of Hassakeh, without any information about the toll of dead and wounded during this battle.

The sources, who asked not to have their names revealed for security reasons, said that the Kurdish militia’s fighters had also taken control of the post office west of the city, and central prison and passports and immigration office in the Gharioun district.

They said that the YPG militia had surrounded the regime forces in the security square, which houses a group of regime bases, with fighters shelling the area with tanks and mortars.

They said that regime forces had shelled districts under Kurdish control from the Regiment 123 in the Jabal Kowkab area, about 10 kilometers from Hassakeh on the eastern side.

The sources said that the regime was still in control of the district between the points it controls in the city and the Qamishli airport, which is the regime’s single supply route.

They said that the Kurdish fighters had taken control of about 90 percent of the city, saying that there had been no truce reached with the regime so far.

Reports had circulated yesterday on a meeting between delegations from the regime and the Kurdish Democratic Union Party, held in the Hemeimeem air base in the city of Lattakia in western Syria, at Russia’s request, without any news about the outcome.