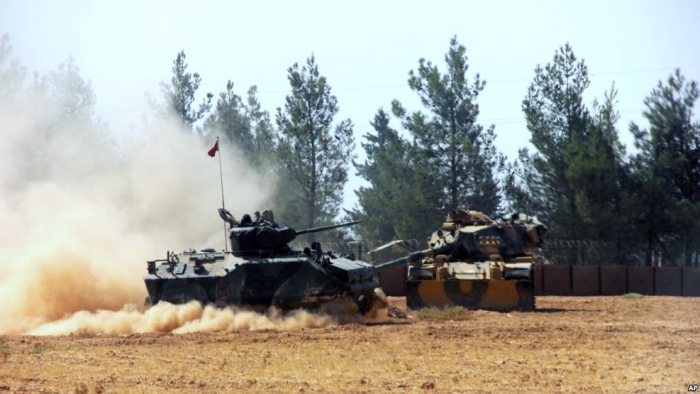 Turkey’s military launched an operation before dawn Wednesday to clear the Syrian border town of Jarablus from ISIS militants as President Recep Tayyip Erdogan said Ankara is determined for Syria to retain its territorial integrity, vowing to take matters into its own hands if required to protect that unity.

As Erdogan spoke in Ankara, the country’s state-run news agency said Turkish tanks had crossed into Syria as part of the offensive that included jets supported by warplanes from the U.S.-led coalition.

The president said that Turkey has only ever sought to help the people of Syria and has no other intentions.

He stressed that the cross-border operations, which targeted ISIS and Syrian Kurdish Democratic Union Party (PYD) fighters in northern Syria, aim to put an end to frequent attacks on Turkey’s border area.

However, Saleh Muslim, the head of the PYD, wrote in a tweet that Turkey was entering a “quagmire” in Syria and faced defeat there like ISIS.

Ankara sees Muslim’s PYD, which has also battled ISIS with U.S. backing, as a threat because of its links with Kurdish militants waging their own insurgency on Turkish soil since 1984.

“Turkey is in Syrian quagmire. Will be defeated as Daesh,” Muslim tweeted in Turkish, Arabic and English. Daesh is the Arabic acronym for ISIS.

A Kurdish People's Protection Units (YPG) spokesman also said that the Turkish intervention in Syria is an act of blatant aggression.

A senior U.S. official confirmed that Washington will provide air cover for Turkey’s operation, saying the Obama administration was “in synch” with its NATO ally on plans.

The official made the comment in a briefing to reporters who were travelling on U.S. Vice President Joe Biden’s plane en route to Turkey, where he is due to meet both Erdogan and Prime Minister Binali Yildirim.

In its report, the Anadolu Agency, which cited unnamed military officials, did not say how many tanks entered Syria. The private NTV television said as many as 20 tanks had crossed into Syria and that clashes were taking place at the border. Earlier in the day, NTV said that a small number of Turkish special forces had crossed into Syria as part of the operation.

NTV television said it was an “intruder mission” to carry out “pinpoint operations” against ISIS as part of the mission to clear the town of Jarablus of the extremists.

The operation in Jarablus is meant to safeguard Turkey’s own security, according to Turkish Interior Minister Efkan Ala, who said Ankara “cannot sit and watch.”

“It is Turkey’s legal right, it is within its authority” to take action, the minister said, adding that the operation aimed to support the moderate Syrian opposition.

Foreign Minister Mevlut Cavusoglu also issued a stern warning, saying Syrian Kurdish fighters must return to the east of the Euphrates river or Turkey will “do what is necessary.”

Cavusoglu said that no one would be brought in from the outside and settled in Jarablus.

Jarablus lies on the western bank of the Euphrates River where it crosses from Turkey into Syria and is one of the last important ISIS-held towns standing between Kurdish-controlled areas in northern Syria.

Taking control of Jarablus and the ISIS-held town of al-Bab to the south would be a significant step toward linking up border areas under Kurdish control east and west of the Euphrates.