The new parliament will be formed jointly between the current government, the internationally framed opposition and independent forces, because going straight to normal elections under the current circumstances will end up with warlords winning the elections. 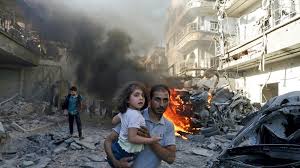 A group of Syrian technocrats, professionals and businessmen and women have launched a new initiative to put an end to the war in Syria. It is called "We are all Syria," and it is based on a harmonic solution rather than negotiations or political solutions. The initiative consists of 13 main steps and 12 accompanying steps that include detailed and complete information about their vision of the solution.

The most distinctive steps are: forming a presidential council in which the chairman isn't considered a president.

The elections should take place a year after forming a Parliament and issuing a constitutional declaration that will be used for ruling.

In addition, a joint military council should be formed to stop the fighting among Syrians and to fight terrorism.

The initiative also calls for forming a new Parliament through principles of allocation, direct assignments and internal elections. This will happen jointly between the current government, the internationally framed opposition and independent forces, because going straight to normal elections under the current circumstances will end up with warlords winning the elections.

The initiative is based on the principle of citizenship, and the idea that Syria is a united nation, regardless of any ethical or sectarian considerations. It suggests that an international committee formed under an international consensus will carry out these steps as long as this committee has no political or executive authorities and it dissolve itself immediately after the presidential elections.

The initiative notes thay the formation of a transitional governing body cannot be realistic or practical due to the structure of the Syrian state and its current institutions, and it suggests an alternative frame that consists of constitutional and legal steps that mainly aim at building a rational state that has firm laws and standards in order to achieve the people's dreams of coexistence and citizenship rights.

Dr. Nidal Alshaar, the former minister of economy and one of the organisers of the initiative, noted that the first draft was written three years ago by a group of technocrats who are not related to any of the conflicting parties and seek no part of the upcoming ruling body. The initiative is an attempt to overcome the political deadlock and to get all Syrians to participate, because its main motto is no exclusion and no favouring.

What's remarkable about the initiative is the detailed administrative and technical notes related to each step regarding economics, the security agencies, the presidency and the army. It stated the criteria for succeeding in implementing every step, how long it should take and who should be responsible for it, and it didn't ignore the fact that each step needs a methodology that is set by Syrian specialists.

Organisers of the initiative see that it is not like any other initiative because:

1- it is realistic and far away from the high demands of some parties and thus can be considered more administrative than political.

2- It can be quickly applied, with no need for traditional long-term procedures.

3- It enables the independent parties to participate and play a central role in saving Syria.

4- It does not call on the conflicting parties to sit together to negotiate.

The initiative also believes that the Syrian people have no dispute or disagreement over the geographical and structural components of Syria. The conflict, in its origins, was about the way of ruling rather than the person ruling. Thus this initiative distances itself from personalizing the conflict and opens the way to all parties to participate in shaping the Syrian ruling structure away from the religious, ethical and sectarian quotas. It is based on the principles of citizenship where all Syrians are equal in a way that serves the Syrian state and its united people and institutions.

The initiative stressed that putting an end to the war is the highest priority of the triumph of good, which is the real triumph. However it noted that the parties must not be fooled by small victories here and there, because a Syrian does not triumph over another Syrian, they triumph together.

It also noted that "the immediate rejection of a settlement that involves everyone and protects the country can only mean that they do not care if the conflict, the destruction and death continue, or it means that they can't offer a different solution."

The organisers said that "the initiative is trying to find a consensual non-exclusionary solution. A solution that starts with Syrians and ends with them, without any tutelage or interference."

Here are the names of the founders of the initiative. There are 500 other names that will be published later.