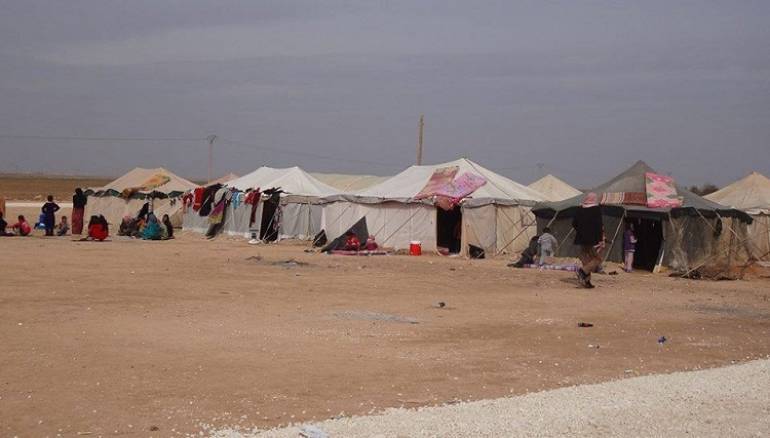 Ahmad Ramadan, member in the “Furat Post” campaign said, “the Kurdish self-administration and SDF militia detain hundreds of Deir-ez-Zor locals in a camp […] in Shadadi area. Others are distributed [through] other camps [and endure] very hard living conditions.” He added that they are waiting to get a guarantee for SDF checkpoints to allow them to cross in to Hassakeh city.

Recently, the SDF had allowed displaced people who fled Deir-ez-Zor province to bring a sponsor to allow them to cross in to areas it controlled.

Ramadan clarified in a statement to Zaman al-Wasl that the families moved from Deir-ez-Zor western countryside to Shadadi and Al-Houl through their relatives who live in Hassakeh city.

He pointed out the displaced from Deir-ez-Zor take different roads to exit Islamic State-controlled areas. One to the north of Aleppo via Raqqa road and another to Damascus countryside through Badiye. A third route, the closest, is to Hassakeh via Al-Houl and Shadadi.

Ramadan indicated that people must buy water and food and tents in the camp, adding that a child from Al-Malhe died because of a lack of water.

The Democratic Union Party (PYD) established four camps to receive displaced people from other areas and banned them from residing in areas under its control. Arab-Iraqi refugees mainly live in Al-Houl and Roj in Hassakeh’s eastern countryside, whereas Yezidis reside in Nawruz camp in Al-Malkiye after being displaced from Sinjar in Iraq. Displaced people from Aleppo and Raqqa live in Al-Mabroke camp.