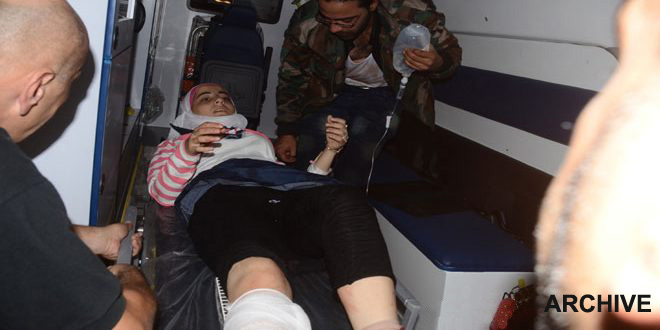 At least seven people were injured on Monday in terrorist shelling on the Mezzeh area in the Syrian capital of Damascus.

A local police source said that militants located in the Douma area fired rocket shells and explosive rounds at the neighborhoods of Al-Sheykh Saad and Mezzeh 86.

Meanwhile in Damascus Countryside, nine people were injured due to a mortar attack by Jaish al-Islam (Army of Islam) on Al-Wafideen Camp.

Four people, including a child, were killed and six others were injured on Monday in shelling by terror groups on the Hamdaniya and Salaheddin neighborhoods in Aleppo city.

A police source told SANA that terrorist groups located in the eastern neighborhoods of the city and its western outskirts fired a number of rocket shells on Hamdaniya, killing a girl, in addition to causing material damage to homes and infrastructure.

The source said that no casualties were reported.

Last month, a suicide bomber blew himself up in the Safiyeh village on the Hassakeh-Qamishli road, killing and injuring scores of people.