At least 1,300 displaced people arrive at the opposition-held northern city after representatives from Khan al-Sheikh agree deal with regime to evacuate area 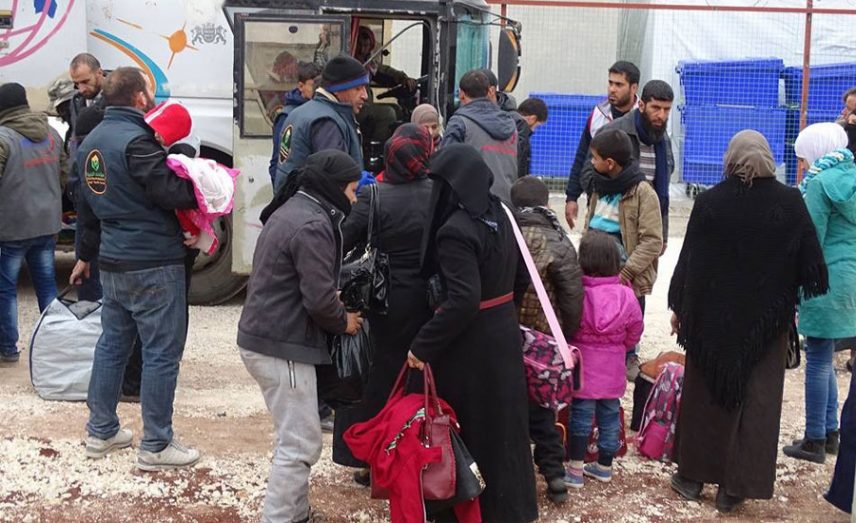 The first group of about 1,300 people, including civilians, fighters and their families, from the town of Khan al-Sheikh arrived to Idleb Wednesday, according to Zeitoun newspaper's correspondent.

The correspondent said that Syrian Arab Red Crescent vehicles accompanied the displaced, adding that the civilians were distributed among shelters in the north, while some others headed to relatives in Idleb.

The correspondent quoted one of the displaced people as saying that a woman had lost her life and others, including women and children, were wounded in a bus accident on the way to their destination.

According to the correspondent, the bus flipped over after losing control following problems with the brakes.

With the departure of fighters and civilians from the areas of Khan al-Sheikh and Zakiya, the presence of opposition fighters in the western Ghouta has effectively ended, after the last two months saw the clearing of Daraya and Moadhamiyat.

In a related event, sources from inside the city of Al-Tall in the Damascus countryside said that an agreement modelled on the Khan al-Sheikh deal was approved between Al-Tall and the Assad regime, and that the displacement of a batch of civilians, fighters and their families from the city toward Idleb was expected soon.