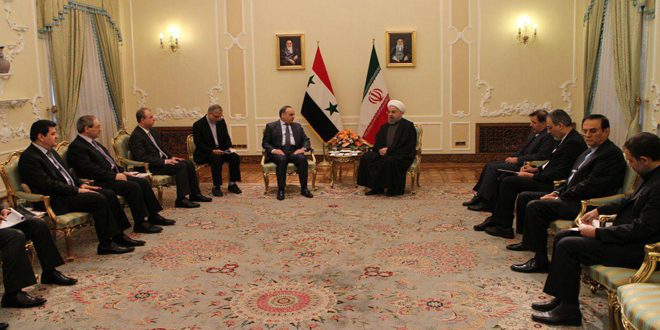 Iranian President Hassan Rouhani received Syrian Prime Minister Imad Khamis in the capital Tehran on Wednesday, asserting that the liberation of Aleppo and the recent ceasefire deal are two important steps towards establishing peace and stability in Syria.

The Iranian president reiterated that the Syrian people alone are the ones to decide their country’s future, expressing hope that next week’s Astana talks will lead to actual results.

Rouhani also stressed the need to make use of opportunities and resources to bolster partnership between the two countries.

For his part, Khamis said that the liberation of Aleppo is the combined result of the Syrians' steadfastness, the Syrian army’s sacrifices and the support of Iran, affirming that Syria’s government and people are determined to confront terrorists and restore security and stability.

He also voiced hope that the Astana talks will lead to establishing peace and stability in Syria, stressing the need to strengthen relations between Syria and Iran.

The PM offered his condolences to Iran over the death of former President Akbar Hashemi Rafsanjani, who died of a heart attack earlier this month.