Senior political adviser announces he is pulling out of the opposition bloc, claiming the Coalition refused to learn from its experiences after years of mistakes 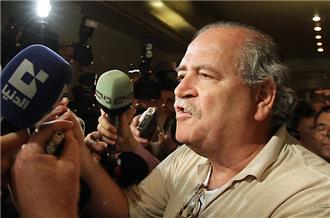 Fayez Sara, member of the political body in the opposition Syrian National Coalition, has announced his resignation after more than three years with the organization, citing his inability to enact reform in the bloc's political institutions as the reason for his departure.

The Syrian opposition member said that the Coalition had been unable to take any position on the “Islamist” forces — from ISIS to the Jund al-Aqsa to Nusra — which played Satan’s role in implementing the Assad regime’s policies, as he put it. It has also been unable to critically review its experience or to examine the experiences of others to define steps, strengthen positive elements, and overcome the errors in its experiences after nearly six years, he said.

Sara said that the Coalition had been born with the diseases of the Syrian National Council, including regional and international interventions that shaped it according to their agendas and included figures and groups among them; the Council was not in Syria, and it was not known before the outbreak of the revolution or after it. Stakeholders gambled on international intervention as a way of dislodging the Assad regime and replacing it, through their efforts to militarize the revolution, and then Islamize and sectarianize it. According to Sara, they pursued all methods, and the cheapest of them, to preserve any position in the leadership of the “opposition,” in contrast to with the civilian and populist spirit of the revolution with its youthful and democratic face.

He stressed that some blocs and individuals had derailed any attempt to reform the Coalition and had imposed their control over the temporary government. This was in light of a leadership dominated by individualism and weakness, lacking in the spirit of initiative in light of the conflict and contradiction governing it and preventing it from taking any decisive position toward extremists and terrorists, which contributed to weakening the Coalition and its place among Syrians and inflicting a heavy damage to the Syrian cause.

The withdrawing Coalition member believed that this distancing from the bloc could give him some power to affect the state of weakness which dominates the institution and is transmitted to its members. He expressed his hope that changing the environment and work conditions would help those who were weak and that they would be better off than they are now, and that the weaknesses of some, including himself, would reverse, and that they would be stronger, if the prevailing environment changed.