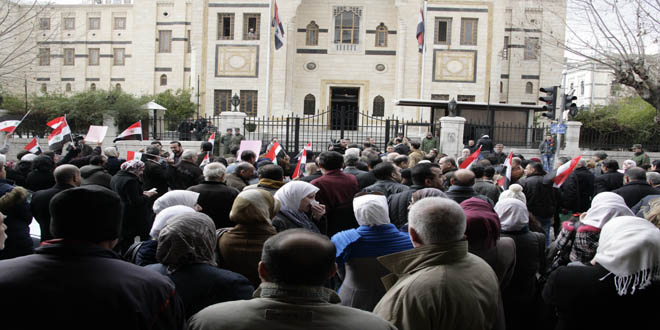 A crowd of people gathered outside Syria’s parliament in Damascus on Thursday to denounce continued efforts by terrorist organizations to prevent access to the capital’s main water supply.

The water supply from the Barada valley area has been cut off for more than a month, resulting in over five million Damascus residents being denied safe drinking water.

A number of MPs, officials and workers from the water ministry of Damascus and its countryside took part in the sit-in, which is aimed at pressuring the international community and the countries supporting terrorism to end the terrorist crime.

“Cutting off [the] water supply to Damascus and its suburbs is a war crime,” a number of the participants said in statements to SANA’s reporter.

Demonstrators carried banners with slogans condemning the international community’s silence regarding the horrible crime, claiming that all people of Syria including children should have the right to safe drinking water.

Parliamentarian Nidal Hmeidi dismissed said that cutting off the water supply to an entire capital and a population of more than five million was “international organized terrorism."

Meanwhile, Syria’s deputy water minister described the move as a “cowardly act of terror” unprecedented in history, calling on those countries supporting terrorism to realize the gravity of the crime.

A representative from the provincial department responsible for ensuring drinking water said that the teams have been working around the clock for more than a month to supply Damascus city with water from alternative sources.

The participants in the sit-in handed a letter of protest to Parliament Speaker Hadiyeh al-Abbas demanding help in letting their voice be heard by the international community.