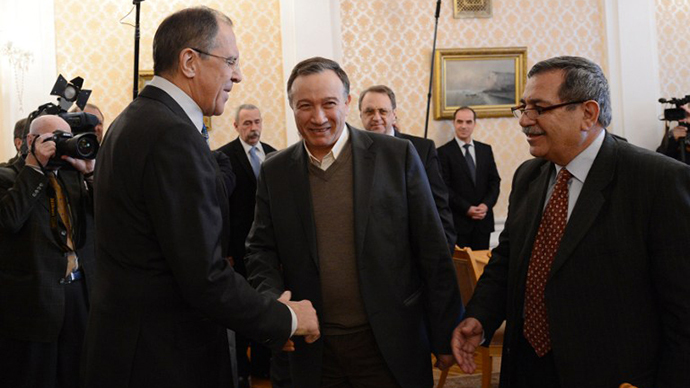 The head of the Syrian opposition Moscow platform, Qadri Jamil, said that Russia confirmed during its meeting with the opposition that “constitutional ideas” which had been distributed by the Russians at the Astana meeting were “just ideas to be discussed among Syrians” and that Russia “was not trying to impose them and that the constitution is a Syrian issue.”

Russian Foreign Minister Sergei Lavrov on Friday met with a number of Syrian opposition representatives in Moscow. According to a statement issued by the Russian Foreign Ministry, the meeting was joined by “Moscow platform” member and leader in the Popular Front for Change and Liberation, Qadri Jamil, and “Astana platform” member and head of the Movement for a Pluralistic Society, Randa Kassis, and two members of the “Cairo platform” Jihad Makdissi and Jamal Sleiman, as well as the general coordinator for the National Coordination Committee for the Forces of Democratic Change and member in the High Negotiations Committee, Hassan Abdel Azim, and head of the “Hemeimeem platform,” Elian Mesaad, and members of the Kurdish Democratic Union Party, Khaled Eissa and Ali Abdul Salam, head of the Building the Syrian State Movement, Louay Hussein, and head of the Popular Will Party, Ala al-Din Arfaat.

The opposition forces who participated in the meeting released a statement stressing their “commitment to a just political solution which guarantees a political transition process toward a democratic state in accordance with the understandings of Geneva 2012, Resolution 2118, and the Vienna and Munich statements, and the international resolutions in this respect, in particular Resolution 2254 of 2016.” Those who met, according to the statement, said there was no single Syrian opposition delegation which was not contributing positively to strengthening the negotiating process and its advancement.

The statement said: “We therefore agree to call upon the entire opposition spectrum, including from opposition platforms acknowledged in Resolution 2254 to continue serious communication and dialogue to form a just, balanced and reasonable representative committee without excluding anyone and without anyone dominating the discussions with the regime delegation under the umbrella of the United Nations enjoying international, regional and Arab consent.”

It added: “Therefore we decide to call on all political platforms with the aim of making the coming round in Geneva a success on the basis of implementing international resolution 2254 and the Geneva 1 declaration, which calls for a roadmap and comprehensive review to arrive at a new Syria and achieve the legitimate aspirations of the Syrian people.”