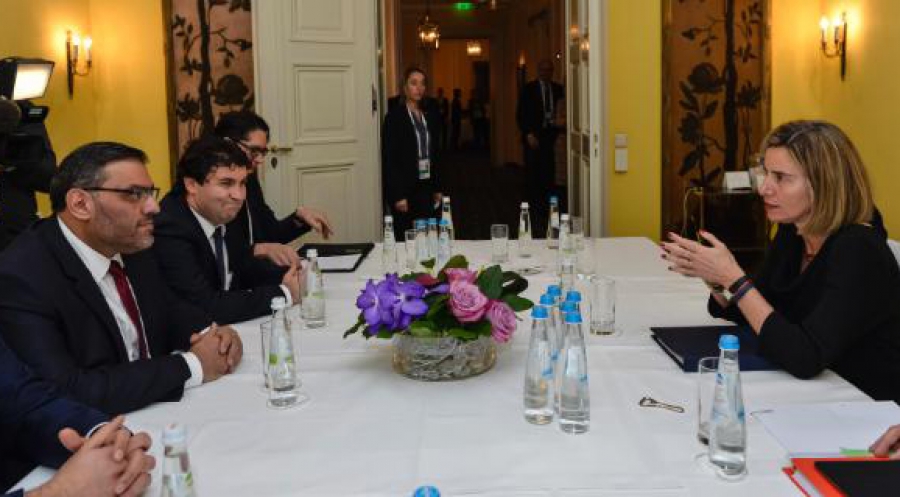 President of the Syrian National Coalition Anas al-Abdah reiterated that political transition in Syria should be the main focus of the upcoming round of Geneva talks scheduled for next week.

He made his remarks during meetings with European and UN officials on the sidelines of the Munich Security Conference on Friday and Saturday. Abdah met with the French foreign minister Jean-Marc Ayrault on Saturday and with EU foreign policy chief Federica Mogherini and UN special envoy to Syria Staffan de Mistura on Friday.

In a meeting with Ayrault, Abdah stressed that the Syrian opposition wants to engage in political negotiations that will result in a genuine political transition. He pointed out that the Assad regime and its allies are seeking to undermine the Geneva talks and render them irrelevant through continued breaches of the truce and an increased bombardment of rebel-held areas.

Abdah thanked France for its support for the Syrian revolution, especially at the UN Security Council, and for its calls for holding Assad regime officials accountable for their involvement in war crimes in Syria.

He also urged continued support for the Syrian opposition’s delegation to the next round of Geneva talks in his meeting with Mogherini on Friday. He stressed the need to prevent the Assad regime and its allies from disrupting the political process. During a meeting of the Friends of Syria, held in the German city of Bonn on Saturday, Abdah praised the European Union's position and its support for the process of political transition in Syria.

Abdah assured the EU foreign policy chief that the Syrian opposition’s delegation to the Geneva talks will be unified, inclusive, and representative of all the rebel and political opposition groups, including the Cairo and Moscow groups. He reiterated the coalition’s commitment to supporting the UN efforts to enforce its resolutions on Syria in order to effect the political transition.

Mogherini also reiterated the EU support for the Syrian opposition on the political level in the Geneva talks as well as for the Syrian people and refugees on humanitarian grounds.

During his meeting with de Mistura on Friday, Abdah again emphasized that the next round of Geneva talks should focus on bringing about a political transition in Syria in accordance with the UN Security Council resolutions 2118 and 2254. He called on the UN to take a firm stance against attempts by the Assad regime and its allies to torpedo the talks and pursue a military solution in Syria.