Abbas says that only the Syrian people can approve an amendment to the constitution through a popular referendum, pro-government newspaper reports 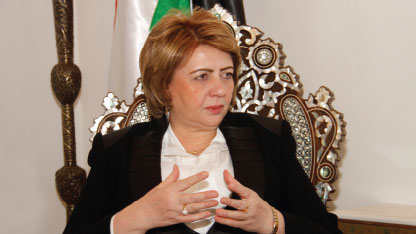 In her first interview since she was elected Speaker of Parliament, Hadiyeh al-Abbas said that the writing of the constitution is an act of absolute sovereignty and that the people of Syria are the only ones who must undertake it.

Abbas added that even proposals and ideas presented by Syria’s ally, Russia, in efforts to bring closer Syrians’ opposing views are “mere proposals and ideas” to help reach a political solution to the Syrian crisis and are not legally binding. “The discussion (of these ideas) will remain confined to the political realm unless all Syrians agree that amending the constitution is needed to achieve a political solution to the crisis,” Abbas added, stressing that only the Syrian people can make that decision through a popular referendum.

Abbas concluded that forming a new constitution is a question of absolute Syrian sovereignty and must only be undertaken by the Syrians themselves through well-known legal mechanisms and channels. “Only the people of Syria have the right to approve the constitution [as] they see fit through a popular referendum after a committee of Syrian specialists writes its first draft," she said.