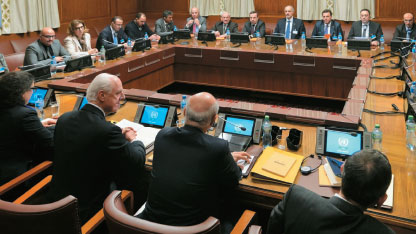 Two days before the start of the formal negotiations of "Geneva 4," as Staffan De Mistura, the UN special envoy, was making final arrangements, Russia expressed regret, stating that it could not proceed with the UN Security Council resolution No. 2254 that intended to include all the Syrian opposition factions in the negotiations.

The fourth round of the Geneva negotiations between the government and the opposition delegations under the auspices of the UN is set to begin on Thursday.

Gennady Gatilov, the Russian Deputiy Foreign Minister told "INTERFAX" Russian news agency that De Mistura did not invite the Kurdish representatives to the negotiations, a demand which Russia has insisted on for many years

Sergei Lavrov, the Russian Foreign Minister said on Monday that Russia drew De Mistura's attention to the importance of not following a "selective approach" while forming the opposition delegation to participate in the Geneva negotiations.

According to Reuters, Michael Contet, the chief of staff of the UN special envoy also said, "De Mistura is making the final arrangements for the negotiations."

"The invitations as well as the schedule are based on the UN Security Council resolutions, especially resolution 2254, which is considered the main guideline in this process. The second procedural paragraph of resolution 2254 calls on the special envoy to hold formal negotiations to discuss the political transition process," Contet added.

The fourth round of the negotiations comes after the failure of the last three rounds. The previous round was held in April 2016 in the Swiss city under the auspices of the UN.

Quoting diplomatic sources, AFP news agency stated that after several rounds of indirect negotiations through an international intermediary, the UN is trying directly to bring the two parties to the negotiation table this time.

Working groups will be formed to discuss the three points suggested in the road map guaranteed by the UN resolution 2254 which was issued in 2015.

De Mistura recently said that the road map mentions "a credible government that includes all parties and a new constitution that will be written by the Syrians themselves, not by foreign parties. Elections, supervised by the UN, will also ensure participation of the Syrian refugees."

Two days ago, De Mistura expressed reservations about the success of "Geneva 4" negotiations. In his address to the Munich Security Conference, he said, "I cannot tell you if it will succeed, but we need to push for momentum. Even a ceasefire cannot hold too long if there is no political solution."

He wondered how committed the American President's administration is to forging a political settlement in Syria. He said, "Where is the US on a political solution? I can't tell you, because I don't know."

The talks resume amid a situation that differs from that which existed in April 2016. The Syrian army retook control of the entire city of Aleppo, including its eastern part which served as a stronghold for different terrorist organizations and armed militias for years.

Donald Trump, the US president, who asked the Pentagon to present new plans to fight ISIS by the end of February, has not yet shown any interest in solving the Syrian crisis.

Brett H. McGurk, the American special envoy of the international alliance, during the Munich Security Conference, said "We will be selfish when it comes to protecting our interests and working for them," a reminder that the priority for his country is "destroying ISIS."