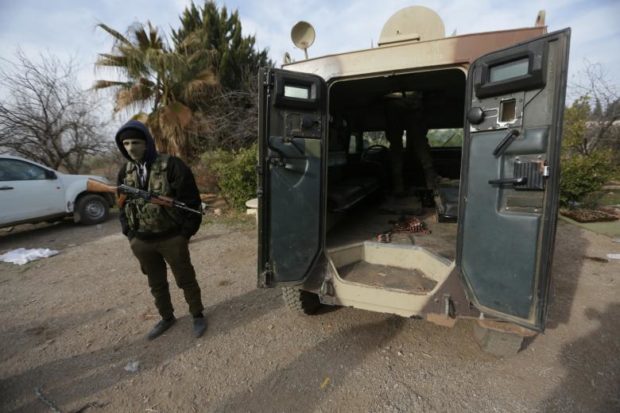 Turkey-backed Syrian rebels announced on Thursday that they had taken full control of the northern town of al-Bab from ISIS after weeks of deadly fighting.

Turkey launched its Syrian operation, dubbed “Operation Euphrates Shield," in August, in effort to push ISIS from its border and stop the advance of U.S.-backed Kurdish fighters it regards as terrorists.

Turkey’s state-run Anadolu Agency reported that rebels had overrun the center of the town, which had been a key ISIS stronghold just 25 kilometers south of the border.

“We are announcing al-Bab completely liberated, and we are now clearing mines from the residential neighborhoods,” said Ahmed Othman, commander of the Sultan Mourad rebel group.

“After hours of fighting, we chased out the last remaining ISIS rank and file that were collapsing after the fierce shelling of their positions,” he added.

But the Syrian Observatory for Human Rights said that ISIS militants were still present in parts of the town and the rebels were in control of less than half of it.

Field commanders from two other rebel factions in the town confirmed the news to AFP.

“Yesterday (Wednesday), we captured the city center, which was ISIS’ security zone… The jihadists collapsed, and this morning around 6 am we completed the operation,” said Saif Abu Bakr, who heads the al-Hamza rebel group.

Abu Jaafar, a field commander of the Mutasem Brigades, said he expected clearing up operations would be wrapped up within hours.

“Dozens of ISIS fighters were killed and we evacuated more than 50 families from inside al-Bab,” Abu Jaafar said.

Meanwhile, U.N.’s Syria envoy Staffan de Mistura launched consultations Thursday with rival sides in the six-year Syrian conflict, but hopes of a breakthrough are clouded by persistent violence and deadlock over the country’s political future.

De Mistura began separate meetings with Syrian regime and opposition delegates in Geneva, notably to discuss the agenda and the format for the negotiations proper — the first U.N.-hosted peace talks in 10 months.

The opposition High Negotiations Committee (HNC) said Wednesday that it wants direct negotiations with the regime, but both sides would have to agree.

Neither regime delegation chief Bashar al-Jafaari nor opposition team chief Nasr al-Hariri spoke as they arrived at U.N. offices in the Swiss city.