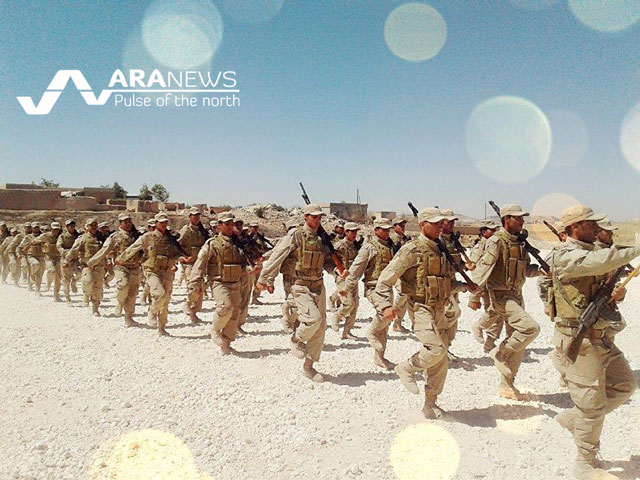 The issue of forced conscription, or what the self-administration calls “self-defense duty” has surfaced once again after a campaign carried out by the military police several days ago in which about 50 young men were detained in the city of Kobani/Ain al-Arab in the northern Aleppo province of Syria.

Supporters of the self-administration said that the “self-defense duty” was necessary at this juncture, in the light of the dangers facing the majority Kurdish areas in northern Syria. The measure, however, has met with popular rejection in Kobani because, according to activists, forced conscription deprives the region of youth population.

The Kurdish writer Mohamed Habash Kanou spoke to ARA News about the issue, saying: “The problem does not lie at all in forced conscription. Defending the land is a duty for everyone. The problem lies in the mechanism and the way it is done and in throwing conscripts onto the fronts without enough experience in carrying arms, especially in the Arab areas where their people have themselves failed to defend them.”

He added: “The people do not oppose conscription to the extent that they oppose the shedding of their children’s blood for strangers to be safe and then find the services in their areas in better condition than the services in the Kurdish areas.” People have been complaining of lack of fuel and reconstruction projects, and soaring prices, especially in the city of Kobani, Habash elaborated.

He said that, “People are not ready to send their loved ones only to find that the only ones who benefit are thieves and a corrupt junta who fill their pockets at the expense of the wretched and the needy.”

The Kurdish forces and parties say that the battle for Raqqa into which the SDF has entered is not in the interest of the Kurds getting “embroiled” in because it is an Arab city.

Kanou added, saying: “If forced conscription is necessary, the conscripts should be guards for the Kurdish villages and cities and there should be volunteers on the faraway Arab fronts from a military perspective.”

There have been louder calls in the Kurdish majority cities against forced conscription since the Kurdish National Council has demanded the return of the Rojava peshmerga.