Negotiations between the Syrian government and opposition delegations were productive, resulting in an agreement to discuss both sides’ priorities, source reports 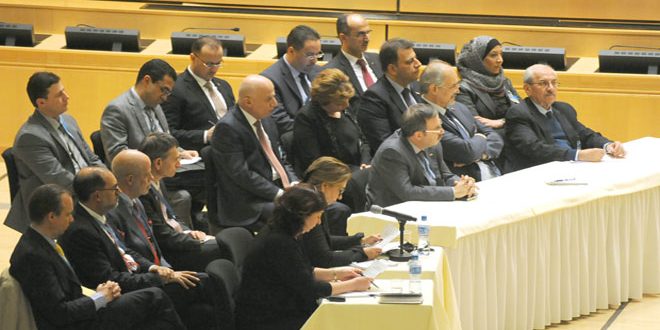 Syrian government delegation discussed the agenda of the Geneva negotiations with UN Envoy Staffan de Mistura and agreed to give equal importance to the subject of terrorism and political issues of governance, the constitution and elections, a source close to the delegation reported on Wednesday.

The same source said that the delegation was satisfied with the progress of the talks and has proposed amendments to the working paper received from de Mistura.

The delegation asked de Mistura to share the amendments with the opposition and receive their feedback, the source reported and added that the delegation’s talks with the UN Envoy over the last two days were productive, resulting in the agreement to include the four issues of terrorism, governance, the constitution and elections on the agenda.

The government delegation has raised the issue of some sides’ inaccurate relaying of de Mistura’s statements about the talks proceedings. He added that such behavior, which aims at misleading the public opinion and disrupting the talks does not reflect well on credibility of the international envoy, urging him to call them out.