Syrian army enters city of Palmyra after heavy clashes with ISIS terrorists, followed by investigative engineering corps in charge of clearing the city premises and archeological site of explosives 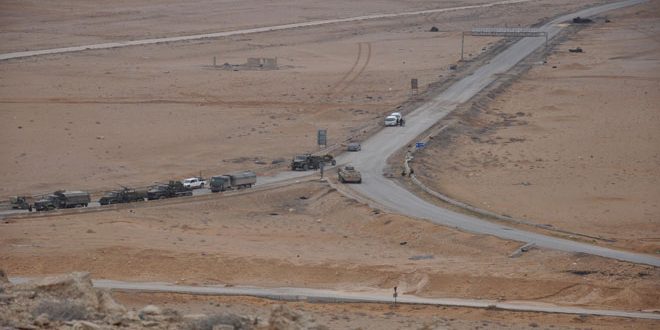 Earlier, the army entered Palmyra city and pursued the remaining ISIS terrorists, who suffered a major setback as they fled towards al-Bayarat al-Sharqiyeh.

SANA's reporter in Homs said that army units had reached the outskirts of Palmyra city from several directions and carried out targeted operations to eliminate the remaining ISIS militants in the city.

The reporter said that the army units’ advance in the city is slow as they need to remain cautious against snipers and explosive devices and car bombs planted by terrorists in the area.

The army units operating in the eastern countryside of Homs province established full control over the al-Tar mountain overlooking Palmyra city after dealing heavy losses to the terrorist organization.

A military source told SANA's reporter that the army units carried out military operations against ISIS terrorists’ gatherings and fortifications in the western countryside of Palmyra city.