Libyan delegation to Syria meets with the parliament speaker, while government officials announce their support for the Syrian government and its people, who, like Libyans, are fighting foreign plots and terrorism 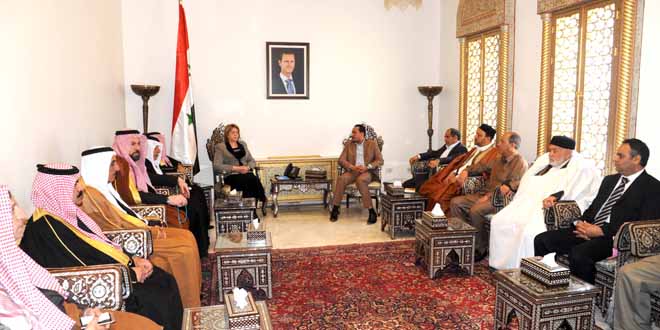 Parliament Speaker Hadiyeh al-Abbas said Monday that Syria and Libya are facing a similar threat as states conspiring against them have continued to sponsor terrorism inside the two countries.

During a meeting with a delegation representing Libyan tribes and cities, Abbas said that foreign interventions in Libya only seek to control the country’s oil and achieve personal interests, using other slogans as pretexts.

Abbas added that Syria, despite six years of terrorism against the country, is deeply concerned about the trials the Libyan people are facing under the pretext of the international protection of civilians. She stressed the need for Libya to emerge from its ordeal and regain its normal life and pan-Arab role.

For his part, the head of the delegation, Sheikh Ashraf Abdel Fattah al-Tuwati Abu al-Qassem, said that the Libyan tribes and cities hail the legendary steadfastness of the Syrian people and its leadership and army in the face of the conspiracy targeting them.

He added that the delegation’s visit aims at strengthening relations between the two countries and said that the tribes in Libya support the Syrian people. He also noted the importance of learning from Syria’s experience in carrying out national reconciliations in different regions.

Syrian Deputy Foreign Minister Faisal Mikdad also received the Libyan delegation and said that Syria condemned the aggression carried out by Western states and supported by some Arab Gulf states against Libya, during which they committed war crimes and crimes against humanity that must be punished.

He affirmed Syria’s support for the Libyan people against terrorist groups backed by Western states, Saudi Arabia and Qatar, who seek to divide Libya and plunder its resources.

For his part, Abu al-Qassem said that the delegation came to Syria to congratulate its people and leadership over the victories achieved by the Syrian army against terrorism, and to express the Libyan people’s support for their Syrian brethren.

He added that Libya and Syria are facing similar aggression, and that the Libyans will continue in their struggle until they defeat terrorism.

The two sides also stressed the importance of uniting Arab people and forces to confront colonialist plots that are targeting the region and sponsoring terrorism.