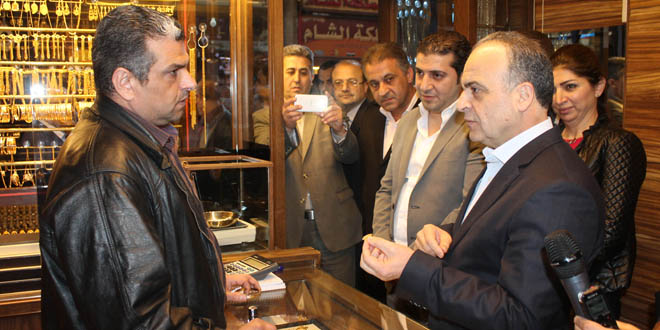 Prime Minister Imad Khamis on Monday toured Al-Hamidiye Market in the Old City of Damascus and met with shop-owners, craftsmen and citizens to discuss trade situation.

Owners in one of the mosaics shops complained to Khamis of the issues and challenges affecting trade in the market, including electricity rationing, customs, taxes and shipping. They also made suggestions for improving work in the markets.

The prime minister said that improving production is one of the priorities of the government, particularly when it comes to small enterprises.

He added that the government was determined to take all necessary steps to improve production in both public and private sectors. Khamis also pointed to steps taken in this regard such as exemptions from fees and fines, and the rescheduling of loans.

He stressed that the government is open to all citizens, particularly people working in commerce and industry, due to their important role in restoring production and fighting inflation.