In a meeting with a European Union delegation, Assad berates the adverse polices adopted by EU countries toward Syria, blaming Western media outlets for distorting the truth of the events and spreading terrorism in the country and region 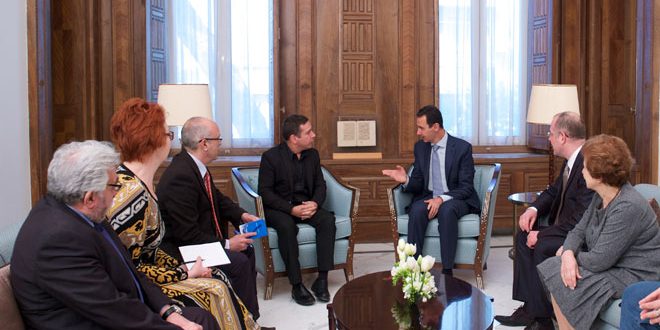 President Bashar al-Assad discussed with a European parliamentary delegation the latest developments in Syria, the European Union’s policies toward the terrorists’ war against the Syrian people and the prospects of finding effective solutions to end the war.

Assad received on Sunday the delegation headed by Deputy Chairman of the European Parliament’s Committee on Foreign Affairs Javier Couso.

Assad pointed to the scale of disinformation carried out by the Western media outlets during the war in Syria which, he said, had ultimately led to the loss of their credibility even among the Western public, adding that this led to an increase in the frequency of European MPs’ visits to Syria to personally witness the reality and reflect the truth of the matter.

Asserting that the polices pursued by several European countries toward Syria and the region in general were wrong, Assad said that these policies had translated into support for extremism and terrorism and enforcement of economic sanctions on people. These policies have brought about the results we are currently witnessing in the spread of terrorism and the flow of large numbers of refugees to those countries, he added.

For their part, members of the delegation, representing several European states and parties, confirmed their intention to proceed with their efforts to correct these inaccurate views both on the political and popular level toward the situation in Syria. They promised to work toward restoring diplomatic relations between the EU states and Syria, as well as lifting the sanctions on Syria in order to bring back security and stability to the country.