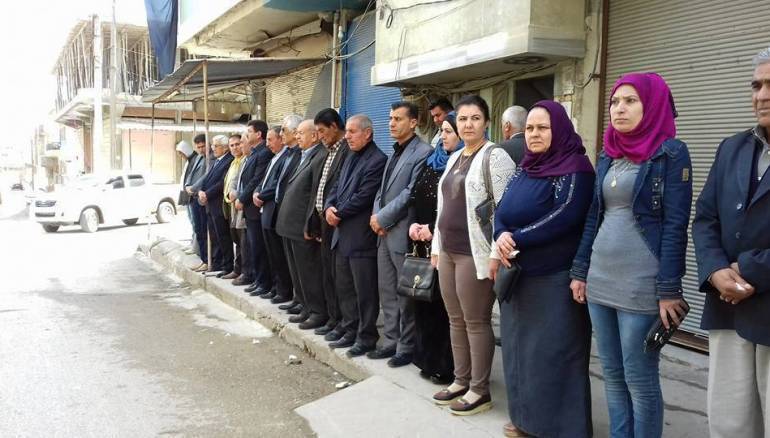 Revolutionary Youth, a group affiliated with the Democratic Union Party (PYD), attacked supporters of the Kurdish National Council during an event organized in Qamishli to commemorate the events of March 12, 2004, the first Kurdish uprising against the Syrian regime.

An official in the Syrian Kurdish Democratic Party told Zaman al-Wasl that members of the Revolutionary Youth attacked a gathering of residents commemorating the events of March 12, 2004, known locally as the March 12 Intifada, in a stadium in Qamishli city. He added that PYD fighters surrounded the Kurdish National Party and the Kurdish Democratic Party offices in Al-Malikiyah city, and prevented people from reaching the Qadouri Bey cemetery.

In commemoration of the March 12 Intifada, all the shops in the cities and towns of the northern countryside, including Qamishli city, closed down. Ahmad added that Kurdish residents lined the streets of different cities and towns in the province. They stopped traffic to stand for a moment of silence at 11 a.m. local time in the cities of Qamishli, Amuda, Ras al-Ayn, Al-Qahtaniya, Al-Jawadiyah, Hasakah and Al-Malikiyah, among others. At night, residents also placed lit candles on rooftops and in balconies.

Supporters of the Democratic Union Party organized celebrations, visited the Qadouri Bey cemetery and issued statements on the occasion of the March 12 Intifada. March 12 is observed as a national holiday in all the directorates under the Autonomous Administration.

On March 12, 2004, regime forces killed around 40 Kurds and injured around 500 people, in addition to arresting thousands, during demonstrations that erupted following clashes between the supporters of the Al-Fatouweh football team from Deir Ez-Zor and the supporters of their opponants Al-Jihad from Qamishli.