Prominent journalist Mohamed Abazid was killed in Russian bombardment in Deraa even as news of the killing of the famous doctor Hassan al-Hariri, known as “Father of Martyrs," circulated on social media, causing widespread grief among Syrians 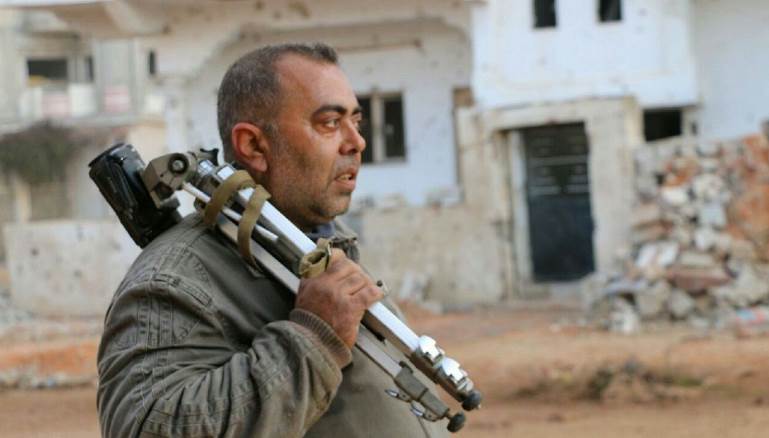 Journalist Mohamed Abazid, known by the name George Samara, was killed on Sunday by Russian air bombardment on the city of Deraa in southern Syria while covering the ongoing battles between the revolutionaries and Syrian regime forces in the al-Manshiyeh district.

The Syrian Journalists Association reported that Abazid had been a correspondent for the opposition website “Syrian Media Organization” in Deraa since 2015, in addition to his prominent work in the field of human rights where he documented violations of the Syrian regime forces in Daraa and its countryside. The Syrian Media Organization said in a statement that moments before his death Abazid had been broadcasting live on his personal Facebook page from Daraa town, and that the video showed heavy bombardment by warplanes on civilian homes.

In the same strike a well-known doctor was also killed — Hassan al-Hariri, who lost all the members of his family in 2014, including seven children, in air strikes on the town of Basar al-Harir while he was tending wounded in southern Syria. His eighth son, Mansour, was rescued from the barrel bombardment on his home. He was three months old at the time, and after that Hariri was given the nickname Abu al-Shuhada (Father of Martyrs).

The news of Hariri’s death met with widespread sympathy from Syrians as one of the most prominent trending topics on social media sites. He had joined the ranks of the revolution from its first days and had worked with a group of doctors in treating wounded and protesters. He also participated in treatment of revolutionaries in more than one battle, including the “Storm of the South.” He was wounded during the battle “Cutting the Aorta” in the area of Tel al-Khadar in July 2014, a battle which coincided with the death of his children.

Syrian political figures, journalists and intellectuals issued a statement mourning Hariri, including a statement from the Syrian opposition council in addition to posts on social media while activists circulated an old video clip of Hariri in which he told his story about the Syrian revolution to the Al Jazeera news channel.