SANA correspondent says government forces successfully thwarted offensive by jihadist rebels in the western Qalamoun, while reports emerge of militants being killed in army operations in Hama, Homs and Deir-ez-Zor 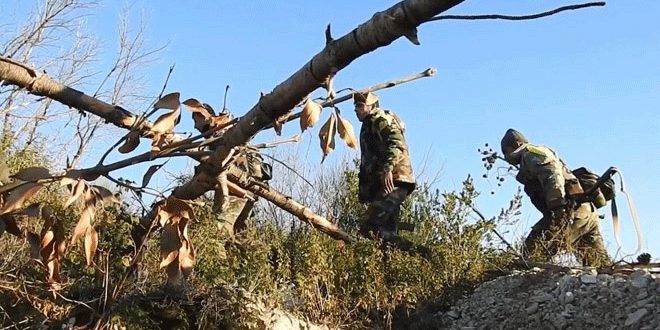 Syrian army units on Wednesday foiled an attempt by the Nusra Front to infiltrate the western Qalamoun region in the Damascus countryside, while government forces also killed scores of terrorists in the provinces of Homs and Deir-ez-Zor.

SANA’s reporter said that army and Lebanese Hezbollah forces engaged in fierce clashes with Nusra Front terrorists before they we able to reach the military posts in Jroud Flita in the western Qalamoun.

The reporter added that the attack was foiled and that a number of terrorists were killed in the clashes while others were wounded, including a field commander, adding that claims by terrorist media sources on achieving advances in the area are baseless.

Meanwhile, army units and allied forces continued military operations in the northern countryside of Hama to retake a number of positions in the direction of Souran while expanding their control around Maarzaf and northwest of Qamhana.

A number of Nusra Front and affiliated fighters in the northern countryside of Homs were also targeted by government forces, which killed and wounded a number of militants.

A military source told SANA that Syrian forces killed all members of a terrorist group affiliated to the Nusra Front in Tal Abu al-Sanasel, 20 km north of Homs city.

The source added that a number of militants were killed and others were injured in the area of Al-Dabbour and in the village of Jawalak, adding that the terrorists’ weapons and ammunition were also destroyed in the fighting.