Saudi-owned Asharq al-Awsat explains that many opposition factions are still deciding whether to participate in the talks in the Kazakh capital, claiming that some parties believe Russia isn't pulling its weight in enforcing the cease-fire deal 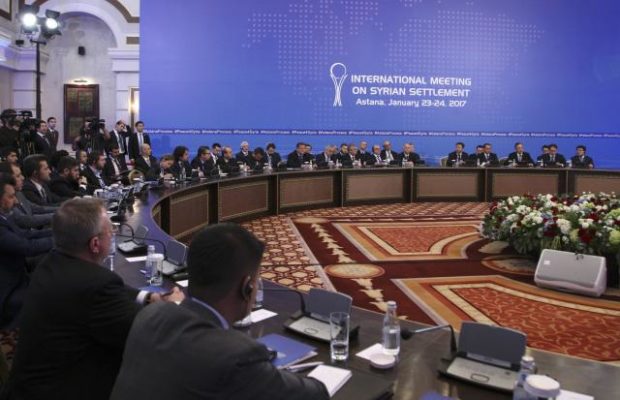 The Syrian opposition is setting the final touches on the documents it received from Russia during the last Astana talks. Meanwhile, opposition factions are yet to determine whether they will participate in the fourth round of talks in Kazakhstan next month. Their participation will be determined based on developments, especially after the United States became involved in the Syrian crisis.

Meanwhile, opposition sources are speaking of a meeting in Turkey with the presence of Russia and some opposition factions in preparation for the Astana talks, but leadership sources denied the meeting.

The leadership sources stressed that they are currently dealing with the cases of detainees and landmines after the military opposition had rejected both documents from the constitution committee. The factions are convinced that the political issue should be discussed during the Astana talks, which are to be held under the title “managing cease-fire areas” and which brings back the suggestions of “restoring order.”

Asharq al-Awsat obtained a copy of the opposition’s notes on the documents, while sources inside the factions said it refuses the participation of the regime and Iran. They added that it is crucial to handle the file according to humanitarian laws and international resolutions.

The sources believe that it will be difficult to boycott the Astana talks after Russia became a key player in the Syrian crisis and a solution can’t be reached without it. In addition, the files of terrorism and a cease-fire had been referred from Geneva talks to the Astana talks, which made it more legitimate and guarantees its continuity. The sources confirmed that if Moscow remained steadfast on its policy, then the opposition will demand that both files be returned to Geneva.

Sources at the Syrian National Coalition told Asharq al-Awsat that the factions are in disagreement about whether to participate in Astana talks or not. Some parties believe Russia will not honor its promises and isn’t doing its duties, especially concerning the cease-fire, while other parties think that any boycott of the efforts or political negotiations can reflect negatively on the opposition.

A source at the Free Syrian Army said there is no disagreement and all parties are unified. He confirmed that the negotiations are continuing and a decision will be taken depending on developments before the meeting next month.

Coalition legal advisor Hisham Mrowwe believes that the decision to participate in Astana is linked to several factors, mainly the involvement of U.S. in the Syrian crisis.

Speaking to Asharq al-Awsat, Mrowwe questioned whether it would be beneficial to attend to the negotiations sponsored by regime ally Russia. He didn’t rule out the possibility that the factions could take the decision to boycott the Astana talks, especially now that the opposition can pressure Russia into executing its previous promises of a comprehensive cease-fire, the release of detainees and sending humanitarian aid to besieged areas.

Earlier, Turkish Foreign Minister Mevlut Cavusoglu announced that his country is determined to participate in the Astana talks. He believes that both Russia and Turkey are capable of solving the problems of the region.

“Ankara seeks to strengthen cooperation with Moscow in the fight against terrorism,” Cavusoglu said, adding that Russian and Turkish counterterrorism experts have started holding joint meetings on a more frequent basis.

French Foreign Minister Jean-Marc Ayrault and his British counterpart Boris Johnson recently stated that there are new efforts and ongoing talks with the U.S. to agree a real and comprehensive cease-fire.

Head of the Syrian opposition delegation to the Geneva talks Naser al-Hariri said on Sunday that fighting terrorism can’t be done without eliminating President Bashar al-Assad.