Loyalist newspaper Al-Watan quotes judicial source as saying crime in the capital and its environs is down, despite small-scale robberies in a number of districts including some cases involving women perpetrators 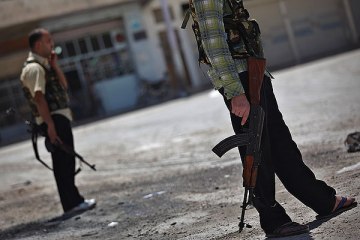 Damascus and its countryside has witnessed a large drop in cases of theft and robbery due to major efforts carried out by authorities to limit crime in light of the crisis gripping the country, according to a judicial source.

Speaking to Al-Watan, the source revealed that no large-scale arrests had been made recently, but added criminal gangs continue to operate in some areas on a small scale.

The source said that there are gangs who steal, rob and smuggle stolen goods to different provinces throughout the country. The source noted that one gang had been arrested for stealing cars in Suweida and transporting them to Damascus, but noted the activity was not part of a major network.

The source said that a number of gangs had been arrested in several districts of Damascus, including Al-Qassaa, in addition to areas close to the city of Jaramana.

The source said that a number of robbery gangs that had been arrested were led by women, saying that women are playing a large role in thefts and robberies.

The source believed that the gangs were among the most dangerous criminals faced by society in light of the current crisis, saying that they are willing to use force and in many cases their members rely on kidnapping figures to obtain ransom money.

The punishment for robbery can reach up to 15 years of hard labor, he said, adding that the punishment is increased if there is kidnapping involved.

The source believed that Syria was a country which had not seen major theft and robbery before 2011, but that the crisis had imposed a new reality leading to an increase in the rates of these crimes.

A number of lawyers have called for harsher punishments related to theft in public places. The Justice Ministry has finished an amendment to the draft penal code which included a major revision to its articles, including those related to the punishment of crimes of looting and theft.