Russian foreign minister tells European counterpart that Moscow will continue to move ahead with plans for a peaceful political solution through U.N.-approved channels, despite efforts by some players to evade negotiations in favor for regime change in Syria 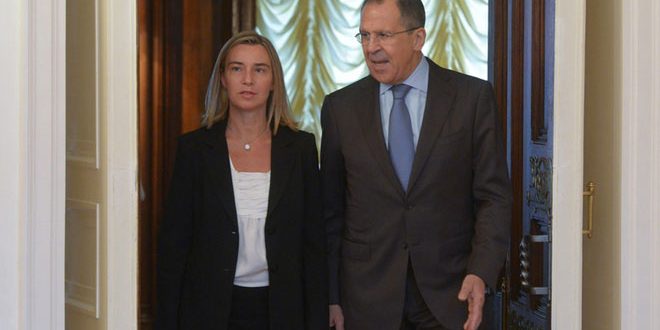 Moscow is moving ahead with efforts to resolve the crisis in Syria through its support for the upcoming talks in Astana and Geneva, despite attempts by parties to sidetrack negotiations through incidents on the ground, Russian Foreign Minister Sergey Lavrov said on Monday.

Lavrov’s comments came during a press conference with European Union foreign policy chief Federica Mogherini, in which he announced that Russia informed its partners of efforts to push forward the settlement of the crisis in Syria and launch dialogue between the Syrians.

The Russian foreign minister claimed this month’s chemical attack on Khan Sheikhoun and the attack on Shayrat air base were conducted as an attempt to evade United Nations Security Council resolutions and inter-Syrian dialogue, in an attempt to move toward regime change in Syria instead.

Lavrov said Russia expects that independent experts from the Organization for the Prohibition of Chemical Weapons (OPCW) will be sent to Syria to investigate the two incidents, expressing hope that investigations would be transparent and “not cloaked in any secret from member countries that pay for the work of this mechanism.”

Lavrov said attempts by the U.S. and the West to block OPCW experts from entering the Shayrat air base was strange.

For her part, Mogherini echoed Lavrov’s calls for a full and transparent investigation of the Khan Sheikhoun incident by OPCW.

She also affirmed the need to continue efforts to combat terrorism and work on resolving the crisis in Syria through political means, adding that there are common interests to put an end to this crisis, eliminate terrorist organizations and preserve Syria's territorial unity.