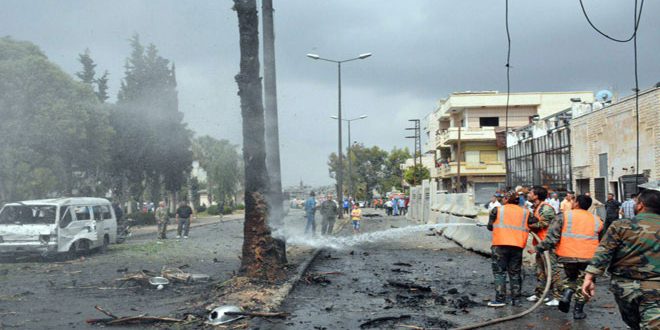 Four people were killed and 30 others wounded when terrorists detonated a car bomb near the main electricity station in the Zahraa neighborhood of Homs city.

SANA’s reporter said that two terrorists detonated a vehicle in front of the electricity station, claiming the lives of two girls, a woman and an engineer working in the station.

The reporter pointed out that members of a security patrol opened fired on the car before the terrorists blew themselves up prior to reaching the heavily populated main square.

Homs Governor Talal al-Barazi said in a statement to SANA that the hopeless attempts of the terrorists to destabilize the situation in Homs city is doomed to fail, stating that Syrians have taken their decision to confront terrorism and eradicate it from the whole country.

Homs city was declared free of all arms groups since Sunday after the completion of the reconciliation agreement in Al-Waer neighborhood when hundreds of gunmen left the district.