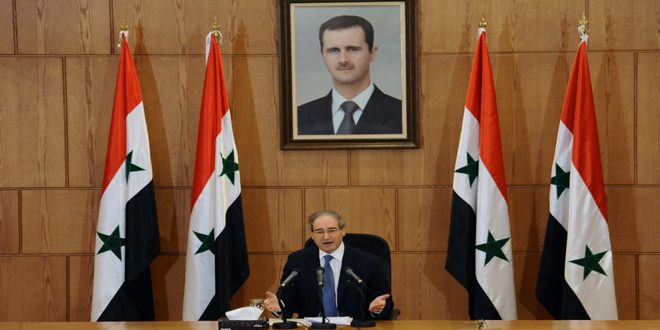 Syria’s Deputy Foreign Minister Fayssal Mikdad on Monday said the accusations about the Syrian government's alleged use of chemical weapons aim at defaming the country and prolonging the crisis following the achievements made by the Syrian army in the war on terrorism.

“I affirm in the name of the Syrian Arab Republic that Syria disposed of its chemical program completely. There are no longer any chemical weapons in Syria, or any toxic chemical materials or gases that could be used in military operations,” Mikdad told reporters on Monday.

Mikdad, who heads the committee for implementing Syria’s obligations under the Chemical Weapons Convention, added that the Organization for the Prohibition of Chemical Weapons has acknowledged Syria eliminated all its chemical weapons.

The deputy foreign minister also hailed recent developments which have seen the Syrian army and its allies advance all over the country, adding that national reconciliations are making great achievements in and around Damascus and in Homs.